Honda NSX vs Audi R8 V10 Plus: The Supercar Battle 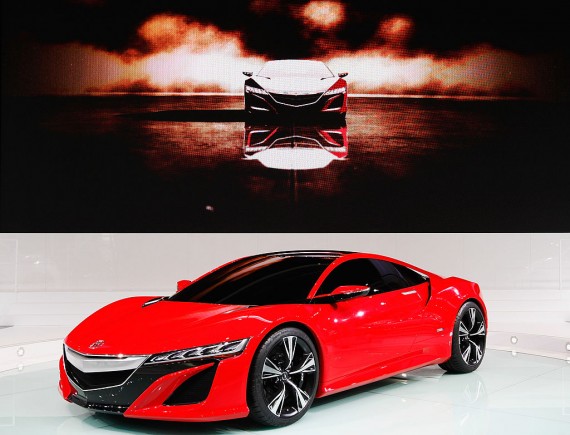 Both the 2017 Honda NSX and the Audi R8 V10 Plus offer performance that most can only dream of. We compare the cars based on the specs sheet and see how they outperform the other. (Photo : Photo by Lintao Zhang/Getty Images)

As the year ends and the new year starts, car enthusiasts, hobbyists, and performance drivers alike are window shopping for the next car that they will be driving off from the dealership. Two of the most highly anticipated performance cars that petrol heads are eyeing are the new 2017 Honda NSX, known as Acura NSX in the United states, and the Audi R8 V10 plus. Check the details below to know which can outperform the other based on the spec sheets provided by their respective manufacturers.

The 2017 Honda NSX is an ideal example of a futuristic performance car. The legendary NSX was the only Japanese supercar that can be directly compared to a Ferrari in the 90s. The new version is packed with a 3.5liter twin turbo V6 engine that works with two additional electric motors that put out a total of 573 horsepower and 406 pound-feet of torque. This sleek performance car can reach zero to 60 miles in just 3.1 seconds.

The Audi R8 V10 plus, on the other hand, is a bigger, meaner looking machine. It does not have electric motors to help its petrol engine but the massive 5.2liter V10 engine produces a higher 610 horsepower and 413 pound-feet of torque. The R8 V10 Plus can reach zero to 60 miles in a mere 2.7 seconds.

The 2017 Honda NSX is equipped with a nine-speed dual clutch transmission, while the Audi R8 V10 Plus comes with a seven-speed dual clutch automatic transmission. Both cars come in a four-wheel drive as a standard. The Honda NSX is heavier by at least 200 pounds than the Audi R8 that may be caused by the additional electric motors. Although the Honda NSX have a less powerful powertrain and a heavier body, it does have a cheaper base price tag of $157,800 dollars, while the Audi R8 V10 Plus starts of with $185,000 dollars for its base model.

When looking at the specs sheet, the Audi R8 V10 Plus is the clear winner. However, the Honda NSX's futuristic design and technology may be the one that takes the shape of the future performance cars. Both are astonishing machines that not every one will have the chance to drive.

The Consumer Will Still Be The Clear Winner, Regardless Of What They Drive

Fans could have only imagined the possibility of having electric motors on performance cars, and to work hand in hand with a petrol engine. The Honda's hybrid engine keeps the fuel economy to an impressive 21 miles per gallon combined rating. While Audi's gas-guzzler V10 engine only scores at a combined rating of 13 miles per gallon. But of course, economy ratings may not a big deal if you opt to purchase any of these two cars, but are still worth taking note of. Both vehicles are wonderful and powerful performers and it may just depend on the consumers' personal reference what they decide to purchase and drive.

Faraday Future Releases Another Teaser Against Its Drag Race With Tesla, Bentley And Ferrari

Startup tech company, Faraday Future, have been releasing teaser photos of their new 1000 horsepower production car and teaser videos of it going head to head with the likes of a Tesla, Ferrari and Bentley.

2017 Ford GT Starts Its Production Line: Here’s Everything We Know About Ford’s Supercar

The legendary Ford GT is now set to go for production and have set their production line to be scheduled sooner than we think. Ford Chairman Bill Ford gets exclusive rights to the first car.

Mercedes-Benz Just Revealed the S-Class Night Edition Coupe, Will Be Unveiled At The Detroit Auto Show

The much-awaited Detroit Motor Show, also known as the North American International Auto Show, is just around the corner. Car brands like Mercedes-Benz are announcing what vehicles they will unveil at the show.

Elextra EV is being designed in Switzerland by Robert Palm, CEO of design house Classic Factory, but the project involves several other brands that are contributing in their respective areas of expertise.

Ferrari Profits Spike Up Because Of V12 Supercar Sales

Ferrari enjoys an increase in profits after a boost from sales of the LaFerrari Aperta.

Rare Ferrari LaFerrari To Be Destroyed By South African Authorities

A rare Ferrari LaFerrari will go under the crusher after South African authorities caught its owner trying to smuggle it into the country.