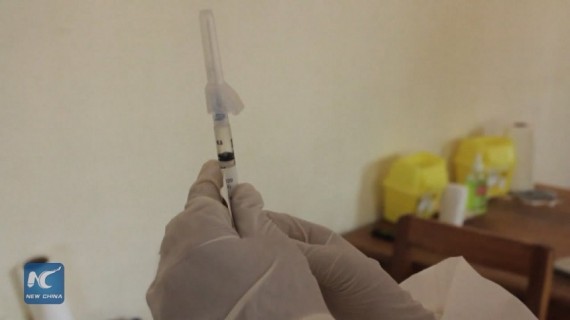 The vaccine was studied in a trial involving 11,841 people in Guinea during 2015, according to The Lancet. The WHO led the study of the vaccine, which was initially developed by the Canadian government and was eventually licensed to Merck, a leading U.S. drug maker. An experimental Ebola vaccine was highly protective against the deadly virus in a major trial in Guinea, according to results published in the medical journal The Lancet. <br /> (Photo : New China TV / Youtube)

Ebola is being around us later last 40 years, with its lethal influence started in 2014 in the provinces of West Africa. Its outcomes have shattered the social facets of the entire society, as the infected individuals and their homes were inaccessible, marked in degrading orange fencing. But essentially, this way is the notable way to avoid the spreading of the virus. Thus, every problem has answers and Ebola prevails as the strong and the fatal kind of issue.

The hard work made by the World Health Organization (WHO) in partnership withGuinea's Health Ministry and some international groups came out with an optimistic solution to kill the virus. An enormously active vaccine, which defends against the disease, is technologically advanced and is anticipated to be available by 2018 or soon as it needs to end this epidemic disaster.

The vaccine was tried on Ebola-affected people in Guinea and was acclaimed as 100% effective for the fatal cause. However, the vaccine hasn't been tested directly on children, as it was not further down procedures of the trials. Though, after the success of the numerous tests and trials, the vaccine is now ready for governing authorization.

The pharmaceutical manufacturer, Merck, has created 300,000 doses of the vaccine with the name rVSV-ZEBOV ready in case the Ebola strikes. And as a sustenance for the stock, the global vaccine alliance named GAVI has also raised up $5 Million for this resolution.

The results on condition that merely 6,000 affected people on dated were sent home virus-free just after 10 days from the trials. Dr. Kieny, the leader of the study, said, "we won't be defenseless now, if the next Ebola strikes". Let's pray for the best.

Scientists used a ring approach, the same technique used to eliminate small pox, vaccinating every person in contact with an infected person in the earlier three weeks. They involved people who lived on the same roof, or were visited by a carrier,close contactose-contact with the patient, their clothes or linen, and most particular "contacts of contacts", investigators reported.

After short-term results were published showing the vaccine's effectiveness, all rings were presented the vaccine instantly and the trial was also encouraging to let children older than 6 years, researchers says.

"Ebola left an overwhelming legacy in our country. We are gratified that we have been able to subsidize developing a vaccine that will stop other nations from continuing what we endured," said Dr KeÏta Sakoba, Coordinator of the Ebola Response Team and Director of the National Agency for Health Security in Guinea.

Roughly half reported mild warning sign soon after vaccination, as well as headache, fatigue and muscle pain but recovered within days deprived of long-term effects.

Researchers noted one patient settled a fever, another developed allergic replies and a third had flu-like sickness, but all three are without long term effects. Additional studies hope to get biologic specimens from people who have contacted with the vaccine to analyse immune responses. One is ongoing together with the vaccine trial among front line health staffs in Guinea.

"This both historical and ground-breaking trial was made possible thanks to model international collaboration and harmonisation, the influence of many experts worldwide, and strong local participation," said Dr John-Arne Røttingen, a specialist director at the Norwegian Institute of Public Health, and the chairman of the study fact-finding group.

GAVI, the Vaccine Alliance, in January funded $5 million to Merck to buy the vaccine once it is permitted, prequalified and suggested by WHO.

Per that agreement, Merck will safeguard 300,000 doses of the vaccine are ready for an emergency use in acting and will be submitted for licensing by the end of 2017. WHO also list the vaccine for, like other trials, vaccines, medicines are for testing, for use preceding to formalize licensing.

Toxic Air Is Now More Dangerous Than HIV Or Ebola Virus, WHO Warns

Considering that HIV and Ebola is both being regarded as the some of the world's most dreaded diseases, what's the truth behind claims that air pollution is now worse and more dangerous than ever as compared to these two illnesses? What makes air pollution more dangerous and deadly? Find out what health professionals have to say

Air pollution is not good for the health. Now there is more reason to be concerned, as air pollution can affect antibiotics effectiveness.

Considering WHO’s recent declaration of being free from Zika Virus’ threat, are we really free from the Zika aftermath? What’s the truth behind new claims that Zika virus can allegedly cause microcephaly? Is Zika a hopeless case? Find out what health authorities have to say

Organ Trafficking: Vatican Says It Is A Crime Against Humanity

The Vatican invited representatives from countries all over the world to discuss ways and solutions to fight organ trafficking. The summit aims to have an agreement among all nations the acknowledgement that organ trafficking is a crime.

Update On Zika: WHO To Launch Strongest Zika Vaccine But After 2020;

As Zika becomes a globally epidemic disease, have we reached the success in our fight against the virus? What’s the truth behind the claims regarding the possible alleged strongest Zika vaccine set to be released after 2020? Is there a particular cause for the delay? Here’s what authorities have to say

The World Food Program extends its reach to this African nation which has long been suffering from famine, poverty and malnutrition.