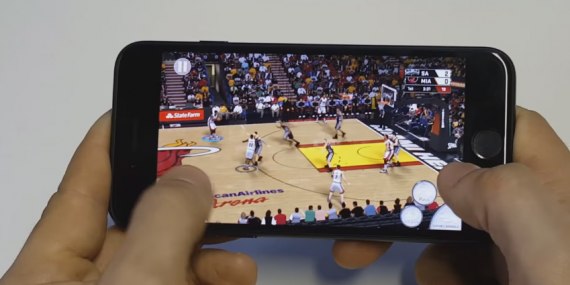 Paid apps and games can give users full-fledged mobile gaming experiences or quick and satisfactory application fixes. Here is the list of top 10 paid ios apps and games. (Photo : Fliptroniks/YouTube)

There are tons of free apps and games that you can download on your smartphones. But nothing beats the satisfaction paid apps and games can give iOS users.

According to TechTimes, it is a treasure trove of paid apps that are either full-fledged mobile gaming experiences or quick and satisfactory gaming fixes. So as 2017 is approaching, here are 10 apps and games for iOS that managed to snatch a spot in the App Store charts.

It's the game The New York Times called a "Sensation," and Cosmopolitan said, "will be the best dollar you've spent." Heads Up! is the fun and hilarious game from Ellen DeGeneres that she plays on her show, and you can play with your friends!

From naming celebrities to singing, to silly accents -- guess the word on the card that’s on your head from your friends' clues before the timer runs out!

Play one of the many exciting categories, or create a category all your own!

Play now the first ACTION RPG game of the acclaimed ASSASSIN’S CREED Franchise.
Explore the ITALIAN RENAISSANCE through the eyes of your OWN ASSASSIN, complete dozens of missions and unravel the epic mystery of The Crows.

Assassin's Creed Identity version 2.8.2 is available on the App Store for $0.99.

Explore randomly generated worlds and build amazing things from the simplest of homes to the grandest of castles. Play in creative mode with unlimited resources or mine deep into the world in survival mode, crafting weapons and armor to fend off the dangerous mobs.

Craft, create and explore alone, or with friends on mobile devices or Windows 10.

Minecraft: Pocket Edition version 1.0 is available on the App Store for $6.99.

Following the record-breaking launch of NBA 2K16, the NBA 2K franchise continues to stake its claim as the most authentic sports video game with NBA 2K17. As the franchise that “all sports video games should aspire to be” (GamesRadar), NBA 2K17 will take the game to new heights and continue to blur the lines between video game and reality.

Above the placid ivory snow lies a sleepy mountain village, brimming with the promise of adventure.

Join Alto and his friends as they embark on an endless snowboarding odyssey. Journey across the beautiful alpine hills of their native wilderness, through neighboring villages, ancient woodlands, and long-abandoned ruins.

Along the way you'll rescue runaway llamas, grind rooftops, leap over terrifying chasms and outwit the mountain elders -- all while braving the ever changing elements and passage of time upon the mountain.

Octodad: Dadliest Catch is a game about destruction, deception, and fatherhood. The player controls Octodad, a dapper octopus masquerading as a human, as he goes about his life. Octodad's existence is a constant struggle, as he must master mundane tasks with his unwieldy boneless tentacles while simultaneously keeping his cephalopodan nature a secret from his human family.

In this sequel to the splash hit Octodad, our cephalo- protagonist has gotten himself in a bind between his wife’s mounting mistrust, and a disastrous trip to the local aquarium! Are you dad enough to control the titular octopus father as he strives to hide his nautical nature from his family while keeping his tangled tentacles intact?

Create your own custom emojis. Stop settling for the standard emojis to convey your emotions and create an UNLIMITED collection of personalized emojis with Moji Maker. Browse from thousands of hilarious designs and effortlessly put them together in our simple emoji builder. Sync directly to your keyboard for seamless use in Messages and most other apps. Regularly updated with free content.

Jump and fly your way through danger in this rhythm-based action platformer!

Prepare for a near impossible challenge in the world of Geometry Dash. Push your skills to the limit as you jump, fly and flip your way through dangerous passages and spiky obstacles.

Simple one touch game play with lots of levels that will keep you entertained for hours!

Five-star tower defense with unrivaled depth and replayability. Now with rewarded leaderboards for even more fun and challenge!

The Bloons are back and this time they mean business! Build awesome towers, choose your favorite upgrades, hire cool new Special Agents, and pop every last invading Bloon in the best ever version of the most popular tower defense series in history.

Packed with content, players can enjoy designing and building roller coasters and rides, landscaping parks and managing the staff and finances to keep their guests happy and the money flowing in.

RollerCoaster Tycoon Classic version 1.0.1 is available on the App Store for $5.99.

Kevin Durant and Trae Young are going to join this year's NBA 2K tournament happening this April 3 but there is still no sign of Kobe Bryant.

According to the latest news, fans of Minecraft can now play the game on their Nintendo Switch. This will enable them to play the game while they are on the go.

Want to acquire both a card pack and in-game currency for free in NBA 2K17? Check out this guide now!

This month's roster update for NBA 2K17 has been revealed. The patch caused huge changes to most of the players present in the game.

Microsoft and Mojang have added a new feature in Minecraft enabling players to purchase creations from the community such as skins, textures and more