Samsung Wants Your Home To Be Smarter And Safer With New Smart Fridge, WiseNet SmartCam and BabyView Home Security Camera 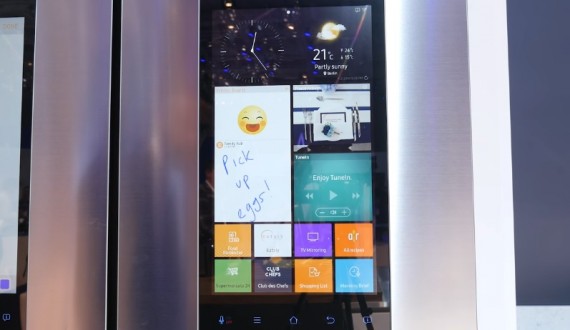 Samsung will be releasing the latest Family Hub smart fridge along with a couple of monitoring systems to keep your home and baby safe. (Photo : SuperSaf TV/YouTube Screenshot)

Samsung is bent on starting the new year right with a few new announcements that are geared towards a smarter and safer home.

The tech company will soon be releasing new members to its smart home family in the form of refrigerators and monitoring systems. These announcements come after it revealed a new four-in-one washer/dryer which is set to make people forget about the flying washer lid controversy of last year.

Aside from the recent unveiling of the latest Samsung Galaxy A series phones, the Korean tech giant has just launched not one but six new smart refrigerators. Not content on the success its four 2016 models, Samsung says it has six more smart fridges to cater to different needs for the different household.

The new models include French Door models with three or four doors while more Four-door Flex models have been added to the current line-up. The smart appliance still has the View Inside cameras which will help the user see what is inside the fridge. This takes out the annoying part of crouching and scrambling to find something in the fridge. This feature also lessens the need to open and close the fridge which is a surefire way to use up more power in old refrigerators.

The Family Hub 2.0 also still has the shopping list feature and support for the apps such as AllRecipes, Grocery by MasterCard, Spotify, and GrubHub.

The latest smart fridge from Samsung has a new interface where members of the household can create their own avatar or profile which can be seen on the fridge's 21.5-inch LED touchscreen. This new feature allows members of the family to post photos, notes and schedules on the fridge's door. This time, however, there is no need for fridge magnets.

Samsung is also announcing the new WiseNet-SmartCam A1 Home Security System at the CES 2017. The system comes with two cameras, one for indoors and another for outdoor use. The indoor 1080p HD camera can move around at a 130-degree angle on its own but when attached to the panning base, its field of view increases to 350 degrees. The base also allows the camera to track movements within the security zones designated by the owner. The outdoor camera will have a 720p resolution and will be powered by a battery.

Monitoring a baby can be fun what with the unexpected things a baby does while no one is looking. With three new BabyView (SEW-3053W, SEW-3055W and SEW-3057W) baby monitors, Samsung intends to take taking care of a baby to a different new level. The monitoring systems come with a 720 HD camera and a touchscreen each. The SEW-3055W takes a notch higher with a Bluetooth watch which vibrates when the system picks up a sound in the baby room. The SEW-2057W adds an environmental sensor the three previous devices.

The environmental sensor, as the name implies, takes the condition inside the room in consideration. It can tell how hot or cold the room is so the parents would know if they need to adjust the thermostat and keep the baby comfortable. It can also assess the room's humidity and air quality.

All Apologies: Tech Companies' Epic Fails And Public Apologies In 2016

Apple, Samsung, and Facebook are a few of the major tech companies that suffered some epic fails in 2017.

The Great Divide: Samsung Shareholders Calling For A Split

Samsung Shareholders are calling for the company to be divided into two.

Samsung is recalling an estimate of 2.8 million top-loading washing machines after receiving reports of excessive vibration that resulted in injuries in some cases.