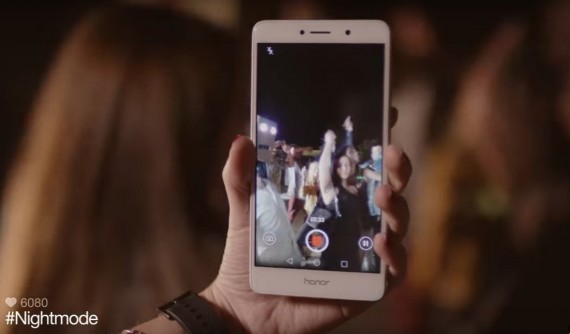 The Honor 6X is a mid-range smartphone that is getting a lot of attention with its decent specs and features under a $250 budget. But if compared to the Vivo V5, can it hold its ground or will it just be another mid-range smartphone not worth knowing? (Photo : FISE/YouTube)

The Honor 6X is one of the talked about mid-range smartphone right now. Praised and appreciated for its $250 price tag and decent specs, can it outperform the 2016's world's best selfie phone, the Vivo V5 which costs $261?

The Honor 6X runs on Android 6.0 Marshmallow and is powered by the Huawei Kirin 655 chip. There are reports claiming that it will have an OS update, but the date is unknown. Performance wise, it is said to be good, especially in games for a $250 smartphone.

The Vivo V5 on the other hand, it runs on Android 6.0 Marshmallow and is powered by a MediaTek MT6750. In terms of performance, it is also said to be good, but with gaming performance, it is a half-half score. Well, according to sources, in terms of casual games, it does pretty well. But for heavy games, you will be disappointed. This round goes to the Honor 6X.

The Vivo V5 features a 32 GB with 4 GB of RAM. Personally, I hate it when a smartphone offers different RAM storages under the same model name. It makes no sense for me. But hey, we all got our personal opinions, right? Based on my personal opinion, this round goes to the Vivo V5.

For its camera specs, the Honor 6X features a rear camera with 2 "lenses." The first lens a 12 MP rear lens and the other is a 2 MP sensor that is used purely for depth information. On the other side, it features a 8 MP front snapper. In terms of camera performance, it is said to perform well in low-light conditions.

For the Vivo V5, it features a 13 MP rear camera and a 20 MP front camera. With its camera performance, it has mixed reviews. Well, it performs quite well in conditions where there is light, but under too much artificial lights, some users claim that it causes a little problem. In regards with low-light conditions, it's not that great, but forgivable. And for its video capture, it's not that great either, because there is this slow-mo effect, struggles with dynamic range, stabilization, and more.

For this round, I will make it a tie. The reason is because there was no source that really tested the Honor 6X's cameras in full details. If you know one, preferably a video, please do send me a link in the comment box. I will be happy to watch it.

The Honor 6X houses a 3340 mAh battery. According to Huawei, the Honor 6X battery can last up to 2 days with regular use and 1 and half days of heavy usage. As for the Vivo V5, it features a non-removable Li-Ion 3000 mAh battery. With its battery performance, it is reported to last throughout the day with moderate use. If what Huawei saying is true, then this round goes to the Honor 6X.

The tally is Honor 6X with 3 wins and the Vivo V5 with 2 wins, making the Honor 6X the winner of this match-up. And one more thing I would like to add: hopefully, in terms of RAM storage, the "global" model version of the Honor 6X will offer 4 GB of RAM. If that were to happen, it would be a great smartphone to have mid-range or not.

Here is a quick comparison review between the Vivo V5 and the new Coolpad Mega 3. Click to know which is the better phone.

Vivo V5 Honest Review: Is It Just A Selfie Phone?

The Vivo V5 is a hot topic nowadays and is praised for its 20 MP front camera. But what about its other specs? Click to know everything about it.

The Number One Selfie Phone vs The Fast Shutter Wonder: Vivo V5 vs Sony Xperia XZ; Which Is Better?

When the number one Selfie Phone is compared to the Fast Shutter Wonder, who will win? Check out this article to know.

The latest leak coming from Weibo reveals specifications and release date of the Honor Note 9.