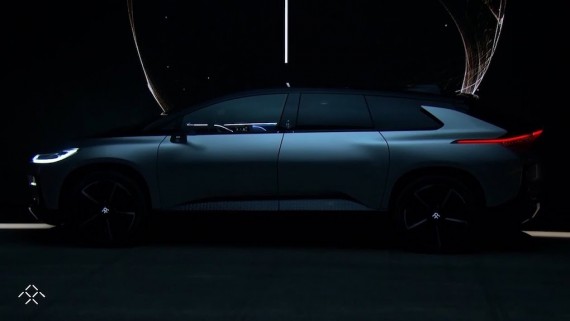 Faraday Future has finally unveiled their first ever production electric vehicle. The FF 91 promises supercar performance in a sports utility vehicle package and car reach zero to 60 in less than 2.4 seconds. (Photo : All new Cars/ Youtube)

Faraday Future, who has been trying its best to increase the hype of consumers for the past year, has finally unveiled their first-ever electric vehicle that is set to go on production. The new vehicle is an all-electric sports utility vehicle with self-driving technology. They named it the FF 91.

The FF 91 was unveiled at the first day of the 2017 Consumer Electronics Show in Los Angeles. Faraday Future started the unveiling by showing some of the functions of the FF 91 such as its self-parking ability. The FF91 had to make a round to the parking lot in order to detect an available parking slot and was able to successfully park itself after finding one. Compared to a human driver, the FF91 had to make a full circle first to determine that the spot is free, unlike a human who could have easily seen that there is one vacant from the time it became free. The car may have taken its sweet time, but it still did a good job in parking itself with ease.

Faraday Future has released teaser videos over the previous months of the FF 91 beating fast cars in a drag race. It is just right that they demo the same scenario at the show. Faraday Future had the same car models; a Ferrari 488 GTB, a Bentley Bentayga, and A Tesla Model S go for a zero to 60-mile run. The F60-milef course, was able to beat the other vehicles, showing that the teaser videos were not only for show and that the FF 91 is a capable machine. It reached zero to 60 miles in just 2.39 seconds that is just a fraction of a second from Tesla's results, but still the fastest, nonetheless.

Most Number Of Technology Hardware In An EV

Faraday Future claims that the FF 91's 130-kilowatt battery can reach up to 378 miles on a singe charge that beats the Tesla's 310 miles of range. The FF 91 also has the most number of artificial intelligence technology and devices in a car. The car is equipped with 10 front and rear-facing cameras, 12 ultrasonic sensors, 13 short and long range radars, and one high definition three-dimensional lidar that is integrated into the FF 91's hood. The Lidar also feature blue LED lighting and can rise out of the hood, giving it a more futuristic look.

The vehicle is far from what Faraday Future introduced during the previous Consumer Electronics Show. The FFZero1 which was introduced last year was more like a fantasy car with its four electric motors, seating for one and 1000 horsepower. The FF 91 looks more like a crossover with its sedan-type body that sits higher than average, bringing it closer to the height of a sports utility vehicle. It has seats for passengers, which would be ideal for a passenger or production vehicle. Faraday Future plans to mass-produce the FF 91 to the thousands by 2018.

If you are, however, excited to get your hands on the FF 91, Faraday Future is now accepting reservations for the first 300 limited edition vehicles that they would sell starting March of this year. Reservations would require a fee of $5000 dollars for the mass produced cars, and an unspecified additional amount to get one of the 300 limited edition FF 91. The reservation fee is refundable.

Faraday Future promises a lot with the FF 91. The company may have placed all their bets on this vehicle and it would depend on the consumers on how they will accept it. Faraday Future has been getting a lot of unwanted attention due to issues that may lead to the company's downfall, but are still optimistic that they would survive the world of the electric car industry.

Faraday Future, who has been in major mishaps throughout the year, will have a make or break appearance at todays Consumer Electronics Show. Fans will finally set their eyes on the startups much-awaited production vehicle.

Startup electric car company, Lucid Motors, decided to partner with Mobileye to use their advanced driver assistance system to enable self-driving technology on the first vehicle that they are working on.

A new viral video shows a Porsche Cayman GT4 spinning out of control as it was embarrassingly left behind by a Tesla Model S P90D.