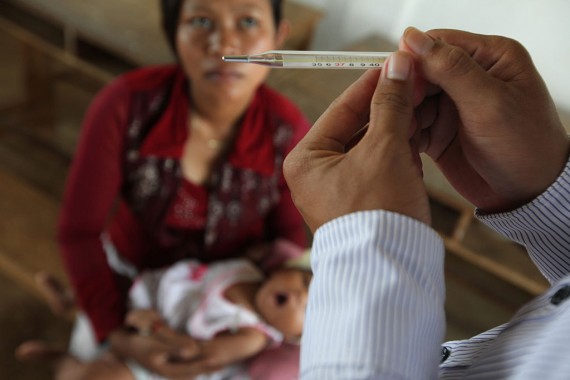 PREY MONG KOL, CAMBODIA - JULY 17: A Cambodian mother watches as her baby gets it's temperature taken during an intense malaria screening which is part of the World Health Organization (WHO) Malaria Containment project along the Thai-Cambodian border July 17, 2010 in Prey Mong Kol village in Pailin province. According to WHO, around 3,000 people from various villages have been tested so far in an area where resistance to artemisinin surfaced, which is the most effective ingredient vital to all anti-malarial drugs used throughout the world, especially in fighting the more lethal Falciparum malaria. The results are proving that the resistant malaria has almost disappeared from the area. Part of the great success is due to the distribution by National Malaria center (CNM) and WHO of the long lasting mosquito nets that also contain the insecticide embedded into the net causing the insect to die upon contact. <br /> (Photo : Photo by Paula Bronstein/Getty Images)

Scientists is engaging on a malaria vaccine have informed that the vaccine has passed a critical breakthrough in human life safety trials. The solution employed a natively modified form of the virus which was impotent to cause a full infection in people. The results of this study were published, Jan. 4, in the journal Science Translational Medicine, and have been categorized as "promising" by tropical disease specialists.

One Step Closer To Malaria Vaccine

As part of the human test, none of the 10 volunteered subjects developed the disease, and the treatment directed to them had no severe side-effects. The virus endures various stages in people as well as mosquitoes. Starting from this foundation, the team of scientists removed three genes, which made the liver infection intolerable to complete.

The results of this research are all the more hopeful, as there are roughly 5,000 malaria genes, and through the erasure of three of them, formidable results were attained. The technique behind this strategy is that individuals are infected with the weakened virus, exposing their immune system. Since the lifespan of the parasite cannot be finalized, the disease will not install in the human body.

Further, the antibodies of the patients were managed to mice, which responded to the reflected infection with a higher overall struggle. "The medical study now shows that the serum is totally weakened in humans and also shows that even after only a single management, it elicits a robust immune reaction against the malaria pest," noted Dr Sebastian Mikolajczak, researcher of the study.

So far, two main orders have been developed in response to the hazard of this virus. The first one consists of wearying the virus itself by exposing it to radiation, while the second one, applied as part of the current research, involves consolidation the patient. The latter is a mixture of administering the anti-malarial drugs to the patients and contaminating them with the weakened virus at the same time, which generates a positive response from the immune system.

A completely practicable vaccine is, however, far from being settled. While there are a high number of trials under tests, the virus still affects approximately 200 million people by the year, as research points out. The disease seems because of plasmodium, a microscopic parasite that blights the human body through the means of mosquito bites, which allow a form of the parasite to get under the human skin.

Once inside the human body, the virus occurrences the liver, where its sporozoites infected the organ with 30,000 copies of the pest. From the liver, the virus gets into the blood stream, where it attacks red blood cells, which from time to time results into the patient's death.

Because the contamination follows these three stages, it is more difficult to create a fully functional vaccine to prevent it from spreading all over the body and, finally, affecting the blood cells.

GAP3KO, was created by genetically engineering the malaria parasite that is weakened after removing three genes that allow infection. The genetically attenuated parasites called or "GAPs" are incapable of multiplying in the human liver.

Last year, pharmaceutical executive, Martin Shkreli, faced international backlash when he bought the rights to an HIV drug and increased the price by 5,000%. Now, school boys from Australia were able to recreate the key ingredient of the drug at a very cheap price.

The drug stays in the stomach for up to two weeks after intake. The pill could be used for possible treatment of Alzheimer's disease and mental illnesses to HIV, tuberculosis and malaria.

The WHO reports that pollution is the main cause of death of 1.7 million kids each year. The report stresses the damages of toxic environments, and recommends some measure to help reduce children's mortality rate.

A new study on anemic children in Africa reveals the link of anemia to malaria prevention. However, the protective property is lost when the person takes iron supplements.

A woman in the UK is thought to have contacted Zika through sexual intercourse with her partner who recently travelled to an affected region. There are only about 60 cases of sexual transmission of Zika globally. This is the first in the UK.