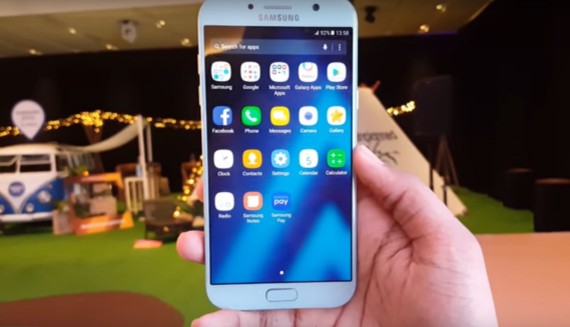 The 2017 Samsung Galaxy A7 was officially introduced last January 5, 2017 and will be available at the market on January 25th, 2017. It is said to be the premium model of the Samsung Galaxy A series, but is it powerful enough to match the UMI Plus E that features 6 GB of RAM? (Photo : 7srk HD/YouTube)

The 2017 Samsung Galaxy A7 and UMI Plus E are two of the hottest mid-range smartphones in the market right now. If you were to choose between the two, which smartphone will you pick?

The Samsung Galaxy A7 comes in with a metal and glass construction and has a body dimension of 156.8 x 77.6 x 7.9 mm. It has a water and dust resistant feature that makes the smartphone capable of being submerged in water for up to 1.5 meters for 30 minutes. It also has a fingerprint sensor embedded on its Home Button and an always-on screen feature.

On the other hand, the UMI Plus E features an aluminum case. It measures 155 mm x 75 mm x 8.8 mm and weighs 185 grams. On its left side design, it has this button that activates its camera app, but some sources claim it could be customized as to what app you want to link it with. So whenever you press that button, the app connected to it will open. One more thing, its USB C port located at the bottom is kind of long, you if you don't use a USB C cable made by UMI, you may find out that using other USB C cables will only fall-out.

For this round, the Samsung Galaxy A7 is better. Well, first reason, the combination of glass and metal is sexy to me and it makes it look like a premium smartphone. The second reason is that I really, really like its always-on feature.

The choice for this round will be the Samsung Galaxy A7. There are two reasons as to why. First, though both smartphones are quite similar to sizes, the Galaxy A7 features a much larger screen which is a big plus for me. The second reason is kind of bias because for me AMOLED screens offer a much better display performance, specifically with the vibrancy of the colors, contrast, and the saturation.

The Samsung Galaxy A7 runs on Android Marshmallow (hopefully there will be an update for Nougat) and is powered by a 1.9 GHz Octa-core processor. It features 32 GB with 3 GB of RAM. It also has an expandable storage option of up to 256 GB.

The UMI Plus E runs on Android Marshmallow and is equipped with the latest Helio P20 chipset by MediaTek. It features 64 GB (though some sources claim it's 32 GB) with 6 GB of RAM. And just like the Samsung Galaxy A7, it also has an expandable storage option of up to 256 GB if you insert both SIM trays with SD cards.

This is kind of hard to decide base on the video sources. Well, both smartphones are fast in terms of software, but in gaming performance, the UMI Plus E is way better and faster. You can literally throw any intense Android game at and it will work just fine. So for this round, the UMI Plus E is the winner.

Now, for the camera performance of both smartphones, it is hard to judge as of now because there aren't that many sources that talks about the 2017 Galaxy A7's camera performance in details. But for the UMI Plus E, there are many. There are even glitches that cause the camera app to crash down on rare occasions.

So, the rear camera performance of the UMI Plus E does pretty well in daylight, while in low light conditions it has trouble preserving details and accuracy. For its front camera, users claim that it is decent enough in daylight, but in low light conditions and if I will scale it from 1-10 with 10 as the highest, I will say 5. And for its video, the rear camera is okay enough in daylight, but with other things, let's just say it was below average and the colors are washed-out.

So for this round, I will go with the Samsung Galaxy A7. Yeah, there are only few details about its camera performance, but a 16 MP for both its front and rear camera is bound to be better than a 5 MP front camera and 13 MP rear camera, right? Plus, there were glitches with the camera app of the UMI Plus E (which UMI currently working on to fix) that causes it crash down on rare occasions. I think that is deal-breaker and if that is not, then I don't know.

2017 Samsung Galaxy A7 vs Honor 6X vs Nokia D1C: Which Mid-Range Smartphone Is Worth Buying?

The Samsung Galaxy A7, Huawei Honor 6X and Nokia D1C are mid-range smartphones that offer the best specs and features. But among these 3 these devices, which has the best offer?

The Umi Plus E Is The Cheapest Smartphone With 6 GB Of RAM, Is It Worth Buying?

The Umi Plus E is the cheapest smartphone that features 6 GB of RAM for only under $250. It is also the first smartphone to be powered with the Helio P20 chipset.