The Nintendo Switch Has Been Officially Unveiled, What Did We Learn? 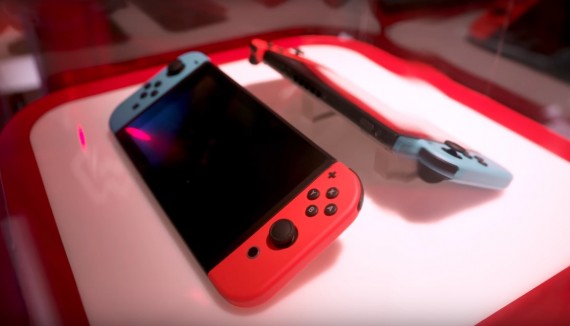 The Nintendo Switch is a hybrid gaming console device worth $300 that offers two elements: handheld and home mode. It features a 720p 6.2-inch screen with a screen resolution of 1080p in handheld mode. (Photo : Austin Evans/YouTube)

When news surfaced that Nintendo was working on a "hybrid" console, everyone was curious as to what will it be and got everybody in the gaming community excited. And if you asked me what it was at that time, I would say it's probably some sort of a smartphone/gaming console type of device, given that in 2016, having a VR feature on a smartphone was really a big thing.

Back then, it was also called the Nintendo NX after an alleged leak about Project NX but was later changed to Nintendo Switch after the release of its promo video. Now that it was just officially unveiled, what have we learned?

First of all is the price. Since last year, it was already long rumored that the Nintendo Switch cost less than $250, but without any solid proof or official confirmation from Nintendo, it was something that could only be labeled as "possible price." However, days before the unveiling event for the Nintendo Switch, that $250 price tag became so popular but only proved in the end that the actual retail price is $300 - about $50 pricier than expected. Not bad for a rumor if you ask me.

And for its release date, the March thing that you've heard? It is true nonetheless because the Nintendo Switch is reported to be released on March 3. And according to Value Walk, this applies to all continents.

This is where the "hybrid" controversies came from and made the Nintendo Switch one of the most anticipated revelations this year. The Nintendo Switch is a hybrid console that offers both home and handheld elements. It features a 6.2-inch 720p multi-touch display and has a screen resolution of 1280 x 720 pixels in "handheld mode." For its "home mode," the Nintendo Switch can be docked with a television set which can increase the resolution of the console to 1080p. It also fully supports HDMI.

Surprisingly, the Nintendo Switch only has 32 GB of onboard memory which is a far cry compared to other gaming consoles such as the PS4 Pro. But there is good news because it can be expanded via a micro SD card.

For its battery performance, the Nintendo Switch's battery life can last between 2.5 and 6 hours, depending on the graphical demands of the game being played. Speaking about games, Nintendo assured that playing the Legend of Zelda: Breath of the Wild can last up to 3 hours of game time.

One of its notable features is its connectivity. According to Value Walk, the Nintendo Switch can connect up to eight Switch consoles at once for localized multi-player sessions. It can also connect to the Internet via an 802.11ac WifI connection.

Another thing that makes the Nintendo Switch a great device is that the console will not be region-locked. Unlike before, previous Nintendo released have been locked, making a number of Japanese Nintendo titles fail to arrive in the Western world. But this time around, the next generation Nintendo Switch will be compatible with softwares from all over the world.

Nintendo Switch To Cash In With The Growing Pokemon Hype

Nintendo is adding a new Pokemon title, the Pokemon Sun and Moon among the Nintendo Switch game titles. Click to know more what to Nintendo plans to do with the Pokemon Franchise.

The Nintendo Switch a.k.a Nintendo NX has finally been revealed, but critics and fans alike are concerned about what could be the console's possible flaws.

Blast From The Past From A Nintendo Console Already Sold Out: Latest News About The NES Classic Edition

NES Classic went on sale and the general public is loving it that it was sold out in a matter of minutes. Now, video game lovers and collectors are desperately searching for the sought after NES Classic.