iPhone 7 Plus and Google Pixel XL Specs, Design & Features: The Best Of iOS vs Android 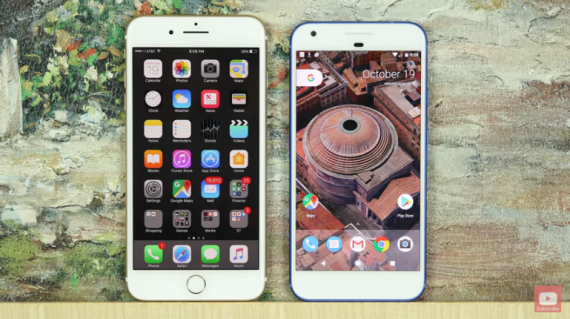 In the latter part of 2016, two of the biggest tech companies released their latest flagships. Apple and Google released some of the best handhelds running on iOS and Android respectively. (Photo : sakitech/YouTube)

Before some of the best smartphones of 2017 are officially released into the market, there is still some time to consider two of the most well-received handhelds of 2016. Apple's latest flagship, the iPhone 7 Plus, was a little controversial but still proved to be a relatively popular choice for the public. Meanwhile, the Google Pixel XL was a sweet surprise, as the search engine giant finally released a fully branded flagship.

The iPhone 7 Plus: Apple's Best Flagship To Date

Powering the handheld is a quad-core A10 Fusion processor and 3GB of RAM. Expandable storage is not a feature, with 32GB being the minimum for internal storage. The batter, which is the best that Apple has produced, is 2900 mAh. The front camera is 7 megapixels, while its dual lens rear camera sports 12 megapixels. But other than the camera, Apple has also changed several features in the iPhone 7 Plus.

For one thing, the unit is water and dust resistant and carries a rating of IP67, which means it can survive for one half hour dip under just one meter of water. Furthermore, the device controversially no longer has the standard 3.5mm audio jack. The Cupertino-based tech giant opted to feature the Lightning port with that capability.

The Qualcomm Snapdragon 821 powers the Google Pixel XL, which was the best that the company could then offer. It also runs on a notable 4GB of RAM and has at least 32GB of storage. However, there is no feature that will accommodate external storage. Its battery is also larger at 3450 mAh. Its front and rear cameras are 8 megapixels and 12 megapixels respectively.

One feature that really sets the Google Pixel XL apart from its competitors is its exclusive compatibility with Google's Daydream headset. The wearable allows users to experience virtual reality in a free and untethered experience. Currently, only the handheld and its lower-end model, the Pixel, are compatible with the same.

In Conclusion Between The Bests Of iOS and Android

Choosing between the iPhone 7 Plus and the Google Pixel XL is a choice that will boil down to the preferred operating system. This is because both the devices offer both power and functionality with ease. However, the Google flagship does have a sharper display, as noted by Pocket Lint. On the other hand, the iPhone flagbearer arguably has the best camera in the market.

2017 is going to be a great year for tablets, with two particular candidates already leading the pack. Both the Samsung Galaxy Tab S3 and the Microsoft Surface Pro 5 are expected to be released soon.