Star Wars: Force Arena Guide: Here Are The Best Darkside Leaders That You Must Prepare For In Battle 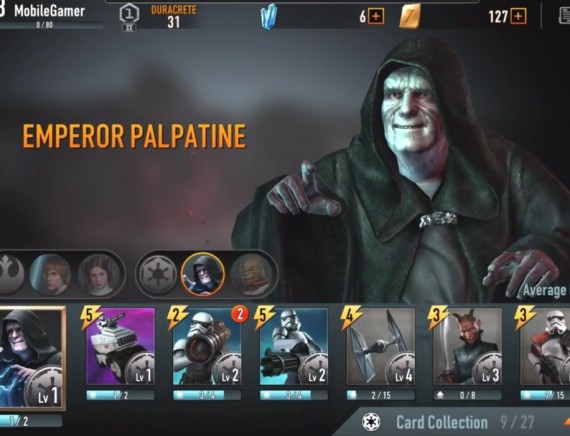 If you’re on the Ligthside in Star Wars: Force Arena, you need to know the nastiest enemies that you will encounter in order to win a match in this video game. (Photo : MobileGamer/YouTube)

It is very exciting to play Star Wars: Force Arena because of its good balance of Lightside leaders and Darkside leaders. Every leader in this video game has their own unique cards which is essential in determining their odds in battle. We are assuming that you already know how to unlock these leaders in the video game. What we are examining right now is who among the Darkside leaders are the most dangerous so you can prepare yourself if you are on the Lightside.

Emperor Palpatine in Star Wars: Force Arena is more active than his counterpart in the Star Wars movies. He enjoys a ton of health and has a very strong attack power. The emperor can be used by your opponent in close-quarters combat. You need to watch out if anyone of the Lightside leader is killed because his power goes up by 14 percent.

If your opponent in Star Wars: Force Arena decides to make an assault to finish you off, his increased power will be hard to overcome. Watch out for Palpatine because he has a very good offense stats for any match or an effective support in 2v2. Although he is a bit slow, he could make up for this because of his Royal Guards.

Next In Line Is Grand Admiral Thrawn

Another darkside leader in Star Wars: Force Arena that you must be careful about is Grand Admiral Thrawn. He is a formidable opponent because even in the midst of a fight, he can instantly summon a Stormtrooper to go to his aid. Furthermore, the Attack Power of this evil lord goes up by 50 percent every 5 seconds. His own skills can be used by your opponent because it can increase the movement and attack speed of his troops by 40 percent.

Bossk Is Another Darkside Leader That You Should Watch Out For

Bossk is an average ranged Darkside leader in Star Wars: Force Arena who enjoys decent health. He has a special talent of regenerating energy when Leaders are killed. This skill is very useful in building troops when you are weak.

Bossk also has a unique ability to produce electricity to stun his enemies and even kill them in close-quarter fights. His abilities in Star Wars: Force Arena can be significantly buffed because of his special IG-88. This enables him to produce a huge, ranged blaster attack while doing a spin move that can destroy large troops.

In Star Wars: Force Arena, Agent Kallus is an Area of Effect leader that can inflict heavy damage fast, even if it is within the lower range. He also has a decent health. But it is his abilities that are really exceptional. If he damages your troop, he will get 10 percent power boost. He can increase his base damage by 250 percent if he performs his special Area of Effect skill. It will also stun nearby enemy troops for about 1.5 seconds. If you're in the midst of a battle, that short time would be very disastrous to your troops.

Dota 2 Vs. League Of Legends: In Terms Of Overall Features, Which One Is Better?

The two most popular MOBAs of today are Dota 2 and League of Legends. Which one will you pick as the better one?

There are players of Final Fantasy XV who are already adept in manipulating the characters of the game. But do they know the little details about their back stories? Here are some of those details.

The game developer of Destiny 2 seems to be looking for people that can handle the job of creating small narrative storyline. This is based on the job listings that it recently posted online.