Cosmetic Surgery May Be Triggered By A Mental Health Disorder; Something That Plastic Surgeons Should Not Miss 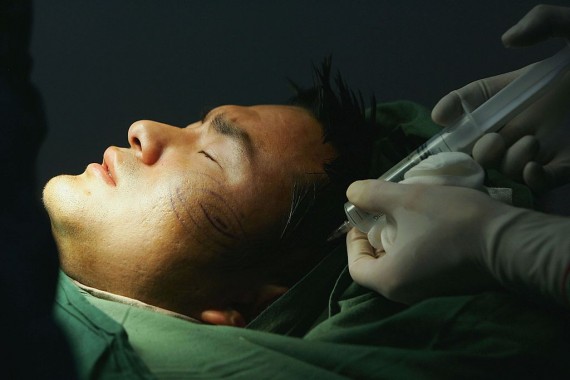 XIAN, CHINA - MAY 30: (CHINA OUT) A doctor injects anaesthetic to the face of Lu Lihua, reported as the first 'Plastic Handsome Man' in Northwest China, during a cosmetic surgery on his cheek at Xian Female Hospital on May 30, 2006 in Xian of Shaanxi Province, China. 26-year-old Lu has undergone twelve plastic surgeries procedures since October, 2004, when he was a senior student in college. During the operations, doctors changed his nose, eyebrows, lip, lower jaw and other parts of his face. China's plastic surgery market is booming and grows by 20 percent annually. The market is attracting more Chinese men as they are taking an increasing interest in their looks, according to state media. (Photo : (Photo by China Photos/Getty Images))

A new research investigates on the mental illness experienced by nearly 10 patients who are seeking facial cosmetic surgery.

What Is Body Dysmorphic Disorder (BDD)?

Plastic surgeons are often unable to spot the mental illness that lies in their patients seeking surgical procedures. Researchers however have been able to identify body dysmorphic disorder (BDD) in less than 5 percent of patients suspected to be suffering from the disorder.

Reports confirmed that a number of specialists suspected the late Michael Jackson to be suffering from BDD. Jackson was known to underwent a series of cosmetic procedures that significantly caused changes in his appearance.

Individuals suffering from BDD may develop preoccupation in their perception of body defects which are very minimal. This may involve obsession on the appearance of their nose, eyes, hair and skin- according to the authors of the study.

"We all knew patients with BDD were in our practice, but we didn't know the prevalence of it," confirmed author Dr. Lisa Earnest Ishii. ICI is also an associate professor of otolaryngology-head and neck surgery in the division of facial plastic and reconstructive surgery at Johns Hopkins University School of Medicine in Baltimore.

"So one of the interesting findings was the high prevalence of BDD [our study] showed," added Ishii. "The other surprise was just how poor we were as surgeons at picking it up."

Data prior to research suggested that 75 percent of the patients with BDD consulted their plastic surgeons about cosmetic procedures. Six to 10 of these patients undergo unnecessary surgeries just to "fix" their perceived defects.

Ishii and her team of researchers assessed 600 patients who sought facial cosmetic surgery consultations. The screening was done in three medical sites in a period of 11 months. The patients were then handed specialised questionnaires that helped the researchers determine if they have BDD.

According to Ishii, it is uncertain why more plastic surgeons were unable to identify the BDD in their own patients.

"We all went into this [field] with the goal of helping patients," added Ishii. "So I feel we are biased to think, 'This patient just needs good help and I can provide that help, and if I just perform some kind of procedure on them, they will be better.' I think our inherent bias prevents us from seeing what's really there."

Ishii was however challenged by Dr. Rodney Rohrich in her views. Dr. Roerich is the editor-in-chief of the journal Plastic and Reconstructive Surgery. He believes that most of BDD patients aim to give a false perception to their plastic surgeons regarding their over preoccupation with their physicality.

"One of the hallmarks of BDD patients is they don't like to be found out," confirmed Dr. Rohrich. Dr. Rohrich is also a clinical plastic surgeon at the Dallas Plastic Surgery Institute. "If they're found out, they leave. These patients are very smart -- most won't even want to do this [BDD] questionnaire because they're so smart."

The researchers did not provide further information on how frequentl BDD screening questionnaire was used by plastic surgeons across the nations. Ishii noted howeever that the surgeons felt "they do a very good job at screening for it."

There was not further mandate on policies regarding further formal screenings. Ishii however strongly feels that the questionnaire should be part in the standard of care in cosmetic surgery.

"The [questionnaire] is very easy to administer and incorporate into a busy practice, and given the patients we miss by not administering it, we stand a lot to gain," said Ishii.

Rohrich also emphasized on the existence of patient privacy law- preventing the cosmetic doctors from sharing any information about anyone who may consult about plastic surgery. These patients often "doctor-shop" especially if one doctor turns them down for a certain procedure due to concerns about their mental condition.

Spotting A BDD Patient And Reffering Them To Psychiatrists

"Every week we see patients like this, but they're very smart and they go from one doctor to another," said Rohrich. "But many times they're also very nice, so they do eventually find a surgeon who will operate on them again. And many have the means and resources to do so."

According to Ishii, plastic surgeons should refer suspected BDD patients to specialists in psychiatric health, such as a psychiatrist.

Rohrich has a different approach however. "I try to let them down softly. I try saying, 'I don't see what you see.' Sometimes I just tell them, 'I'm not good enough to give you the result you want,' " Rohrich said. "You have to be careful about that ... confronting them hasn't worked well. I tried getting them to go to therapy, but they wouldn't go." For him, the idea should be "to never operate on these types of patients," in the first place.

Carol Bryan was beautiful in her 20s and 30s, but decided to get cosmetic surgery for plumper skin. However, dermal fillers, instead of making her more beautiful, made her look like an "alien" instead.

Bra Insert Meets Foundation Sponge: Find Out Why Makeup Fanatics Are Crazy About This

Silicone meets a foundation sponge—find out what this breakthrough means to make up technology.

Actress Jennifer Aniston reveals her use of a laser beauty treatment to maintain the youthfulness of her face. According to the actress, she loves going through the procedure which is unlike fully-ablative procedures, she does not experience scars, redness and peeling.

Maria Oquendo, president of the American Psychiatric Association (APA) has warned psychiatrists to desist from issuing opinions on President Trump’s mental health since this contradicts their code of ethics. She said it is unethical and irresponsible for any psychiatrists to carry on with the president this way. But several psychiatrists are sworn never to remain silent in the face of the president’s unusual policies and mannerisms.

President-elect Donald Trump must “step down before the inauguration before they give him the nuclear codes,” Joy Behar said. She believes that Trump will bring his mental health to the Whtie House.