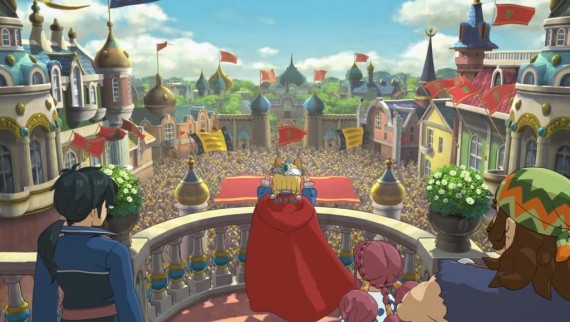 Another "Ni No Kuni" video game from Level-5 is in the works and the it looks too beautiful that it you would think Studio Ghibli had a hand in it. (Photo : Bandai Namco Entertainment America/YouTube)

Another video game from the developers Level-5 is due to release soon and it is already making headlines with its stunning artwork animation and gameplay. The "Ni No Kuni II: Revenant Kingdom" video game is set in an animation that looks like Studio Ghibli had a hand it in the artwork. That set aside the video game also boasts of a challenging gameplay that can be at par with the "Final Fantasy" series.

Level-5 has been gearing up to show off its latest video game development, which is a sequel to one of their most popular game series titled "Ni No Kuni". "Ni No Kuni" is a role-playing video game released initially back in 2010. Back then, the said game was only available on the Nintendo DS.

But after making a breakthrough with "Ni No Kuni" especially with the Western audience, Level-5 has finally decided to work on a sequel especially when everyone was asking for one. The developers admitted that they never expected "Ni No Kuni" to make it big most especially with avid players outside of Japan. "Ni No Kuni" has been greatly received because of its stunning combination of art, gameplay, and music core as well as having sold over 1.9 million copies of the said video game.

Thankfully, Level-5 has widened its horizons and decided to expand the sequel titled, "Ni No Kuni II: Revenant Kingdom" to other gaming platforms. The said video game sequel was announced back in December 2015 and it has been revealed that it will be released on the PlayStation 4 as well as on Microsoft Windows. Though the release date has yet to be determined and made public by Bandai Namco Entertainment, many fans are already anticipating its release, which is slated to be sometime this year.

One of the things that fans are looking forward to is to become immersed once again in the story and animation of "Ni No Kuni II: Revenant Kingdom". Based on the trailer it has released last year, "Ni No Kuni II: Revenant Kingdom" seems a tad similar to the creations of Studio Ghibli even though the said animation studio did not collaborate with Level-5 with this video game. Actually, it looks like it's from a Studio Ghibli movie because one of its former animators is actually working on the said sequel.

Level-5 has revealed that Yoshiyuki Momuse as well as Joe Hisaishi, who were the respectively previous animator and still a composer for Studio Ghibli, are on board for the sequel. The animation alone is not the only thing that reminds people of Studio Ghibli but of the storyline as well. Studio Ghibli is known for making movies that are set on valuing bonds and families and Level-5 is working on their sequel to focus on that plot.

The story is about a king named Evan Pettiwhisker Tildrun who sets out on a battle-ridden journey aided by his comrades and one from another realm named Roland, to reclaim his throne. Level-5 has promised that "Ni No Kuni II: Revenant Kingdom" will be another video game that will amaze players and they have further stated that they are making sure that the story is straightforward and something that western culture can easily relate to. The CEO of Level-5, Akihiro Hino has specially said that the definition of Japanese role-playing games (JRPG) can longer be made as there are no more boundaries to it.

Bandai Namco Entertainment has released a new English-subbed trailer for "Tales of Berseria" prior to its official release in North America and Europe.

Koei Tecmo has released a new trailer for "Toukiden 2" as well as the release dates for the United States and Europe.

Square Enix has revealed that they're making a new RPG as they announce more "Dragon Quest" games heading to Nintendo Switch. Read on for more details.

Get Just Cause 4 and Wheels of Aurelia for FREE at Epic Games now while you still have the chance!

Ace Combat 7: Skies Unknown is a new video game being developed by Bandai Namco. Players who want to experience the thrill of aerial combat will love this game.

Ni No Kuni II: Revenant Kingdom The Game That Combines Final Fantasy And Zelda Into One

What does it look like combining Zelda and Final Fantasy? Well, better check Ni No Kuni II: Revenant Kingdom and marvel in surreality.