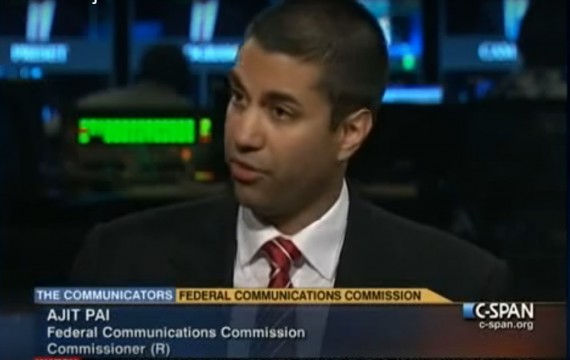 According to Ars Technica, on Tuesday, Jan. 31, Ajit Pai presided over his first Federal Communications Commission (FCC) meeting since being chosen Chairman by President Donald Trump. Pai promised that under his leadership the FCC will eliminate regulations. However, he did not comment about whether he will enforce the existing rules on net neutrality, despite saying that consumer protection and enforcement are important priorities for the commission.

After the meeting, Pai was asked in a press conference about net neutrality. Previously, he has made it clear that he opposes the current rules and has the intention to overturn them. However, he has not clarified whether the rules that are still in place will continue to be enforced by the commission. According to Buzzfeed, Pai also declined to answer questions on the fate of the set-top box proposal.

About continuing to enforce the current rules, Pai pointed out that together with fellow Republican Commissioner Michael O'Rielly they already said that small ISPs won't be punished for violations of the net neutrality rules. ISPs with 250,000 or fewer subscribers will be exempted from the rules by an order currently being prepared by the FCC. But Pai is not saying clearly whether for now, the commission will continue to enforce the core net neutrality rules prohibiting Internet providers from giving priority to Web services in exchange for payment or from blocking or throttling traffic.

In response to a reporter's question, the new FCC Chairman said that he is not willing to comment on enforcement steps, beyond the exemption for small ISPs from the transparency rule. Two other reporters asked Pai the same question but he kept declining to comment. All he said is that, for now, the FCC did not make any determinations.

Enforcement Of Protection Against Robocalling

Pai opposed the Title II reclassification of Internet providers as common carriers as well as the related imposition of net neutrality rules under previous FCC Chairman Tom Wheeler. But it is still not clear whether Pai would support net neutrality rules that were imposed without the use of Title II. However, Pai voted in May 2014 against a preliminary version of the rules not including a Title II reclassification.

Pai said that the FCC takes great interest in the area of consumer protection. Since robocalling is the top source of complaints to the FCC, the new Chairman pointed out that he intends to ensure that consumers are protected from this issue. Explaining his philosophy on enforcement, Pai said that it is important to make a diligent search for the facts, follow the law and take the appropriate action to protect the public interest.

The first steps in eliminating regulations were already taken at Pai's first meeting as chair. Two public inspection files rules will be terminated as a result of a 3-0 vote. Pai said in his press conference that this vote is just the first step toward his goal of removing counterproductive regulations in order to help ISPs to focus their resources on investing in building and upgrading networks.