Watch The First Ever Nintendo Switch Commercial During The Super Bowl 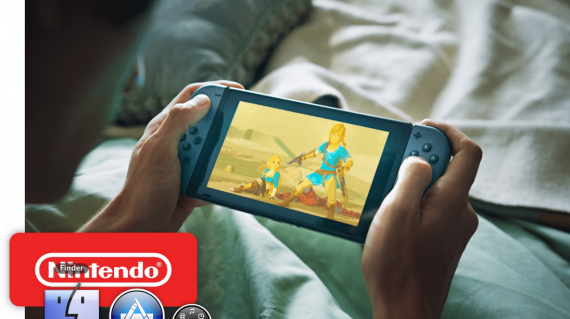 The first ever Nintendo’s Super Bowl Switch commercial shows the many ways you can play Zelda, Street Fighter as well as Splatoon. This is Nintendo's marketing push for its forthcoming Switch console. (Photo : Nintendo/YouTube)

Nintendo is planning to shows different ways a user or group of user can play games such as The Legend of Zelda, Street Fighter and Splatoon in a Switch commercial during the Super Bowl. Nintendo is taking this opportunity to increase the sales of the Switch console that will be released in March and forget the shortage supply of the NES Classic Edition even just for a while. The new ad shows off a variety of game titles for the most awaited Nintendo Switch, but more importantly, it showcases the multiple of ways you can play with the console.

The First Ever Nintendo Switch Commercial For The Super Bowl

Nintendo invested in a commercial to run during the Super Bowl 51 this weekend. On Wednesday, the commercial was shared publicly in an extended cut of its upcoming Super Bowl Switch commercial, which also happens to be the first commercial of Nintendo that has ever produced to run during the Super Bowl. “The most anticipated video game system and video game of the year will be seen on the biggest stage of the year,” explained Nicolas Chavez, Nintendo of America’s VP of Marketing.

As reported by The Verge, the new commercial shows off different titles for the Nintendo Switch console and showcases the variety of ways you can play Switch games such as The Legend of Zelda, Street Fighter and Splatoon. The extend cut version of the video is just less than 2 minutes. “Nintendo Switch will change how, when and where people play games. It’s only fitting that we’re changing how, when and where we advertise those games," said Chavez.

Meanwhile, Nintendo admitted that the company is taking this great opportunity to increase the marketing factor for its upcoming Switch game console. The ad centers on the versatility of the upcoming console and showing viewers to play with the Nintendo Switch in a variation of scenarios. Nintendo says that the Super Bowl ad is a major hit for the company because it is a first for Nintendo and that it will air during the fourth quarter of the game.

The Reason Why Nintendo Picked The Super Bowl

As reported by New York Times, the average cost of a 30-second spot this year rose to $5 million for Nintendo. "There's no bigger stage in the U.S. on which to showcase the platform. I think it speaks to our confidence in the system," says Chavez when he was asked why the company picked the Super Bowl. But why pay that big amount money for just a 30 seconds of publicity?

The Super Bowl 50 last year was the third largest in Super Bowl history, with a total of 112 million viewers, according to Nielsen's statistics. That is a very big accomplishment that still probably understates net totals given the fact that it doesn't take into account people watching that are out of home or who stream the game over the Internet. Following the numbers, is is understood why Nintendo chose this year's Super Bowl.

The Reason Why Nintendo Picked The Legend Of Zelda

Nintendo chose the new game named The Legend of Zelda title to carry the new Switch console out of the others as an intentionally unambiguous heartfelt letter to fans of the series. And in 2017, those fans are no longer kids, as part of the gaming's forefront who first touched the series three decades ago. "Think about your 40- to 45-year-old parent who has really fond memories of playing Zelda growing up, sitting there watching Super Bowl with their 10- or 12-year-old child who maybe hasn't experienced Zelda yet," says Chavez.

Nintendo has recently detailed its financial report for the past 9 months that ended last December 2016. According to the result, Nintendo 3DS sales increase and hit a large growth, while Wii U struggles.