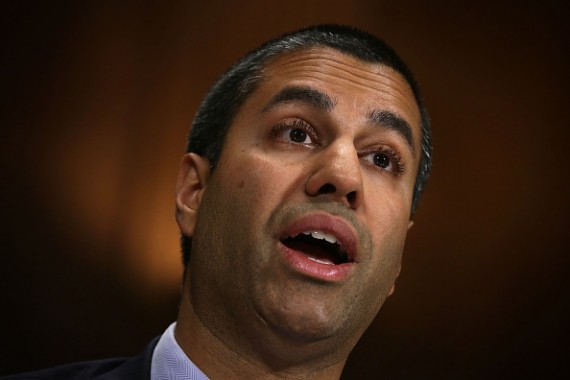 WASHINGTON, DC - MAY 11: Federal Communications Commission Commissioner Ajit Pai testifies during a hearing before the Privacy, Technology and the Law Subcommittee of Senate Judiciary Committee May 11, 2016 on Capitol Hill in Washington, DC. The subcommittee held a hearing on 'Examining the Proposed FCC Privacy Rules.' (Photo : Alex Wong/Getty Images)

There is of pressure on the shoulders of newly appointed Federal Communications Commission Chairman Ajit Pai. And while there are already discussions and plans in place for a better-connected future, Pai would prefer to keep the public aware of upcoming and ongoing motions. One of the first items on his agenda are transparency and 4K broadcasting.

"Today, we begin the process of making the FCC more open and transparent," Pai told reporters on Thursday, as quoted by The Hill. "I'm pleased to announce this morning a pilot project that, if successful, will become a commission practice - one that will give the public much more insight into the commission's activities."

Before Pai was made chairman, the FCC had a practice that was widely criticized by parties in the industry. That is, the agendas of the monthly meetings would be announced but the text of the rules were not shared until the commissioners had already voted on the issues at hand. In essence, the public was being made aware of rules or decisions only after the fact.

The plan for the future is to release a public Notice of Proposed Rulemaking (NPRM), as well as Report and Orders. Other documents will also be made public before the monthly meetings of the FCC. The changes were outlined in a bill entitled the "FCC Process Reform Act," which was unanimously passed in January.

The new ruling will mean that the public will have knowledge on the agenda of the FCC virtually throughout the process. And one idea that Pai is currently considering is the release of 4K broadcasting, as reported by Reuters. The technology would be a new standard to follow in the broadcasting industry, which would improve picture quality and will provide better access to programs.

"The FCC should enable innovations in the broadcasting business," Pai had said on Thursday. Pai and his push for a higher standard service have been supported by several prominent members of the industry. Tegna, Inc., Twenty-First Century Fox, Inc., Scripps Networks Interactive, Inc., Walt Disney Co. and a few others - essentially represented by the National Association of Broadcasters - petitioned to approve the standard in April. The standard, dubbed ATSC 3.0 has several aspects.

Created by a non-profit industry committee that consisted of parties in broadcasting, cable, computer, motion picture and consumer electronics, the standard uses precision broadcasting. It would target emergency or weather alerts on a street by street method. The system could virtually allow broadcasters to use receivers in order to relay important information.

The downside of the same, however, is that the next generation signals will not be supported on existing television sets. In order to properly work, individuals will need to purchase new sets. The other option is to purchase converter equipment that will receive the 3.0 service.

A scheduled vote will be held on February 23 regarding whether or not broadcasters will be allowed to use the new standard on a voluntary basis. This issue is one that has been dear to Pai for months now. He had pushed the same since the FCC was chaired by Democrat Tom Wheeler. Pai began working with the FCC in 2012.

Uber & Daimler, A Match Made In Heaven: Autonomous Vehicles + A Large Network

The world of autonomous driving is about to get bigger, thanks to German automaker Daimler and will become more accessible as the company partners up with Uber and its large ride-hailing network.

The autonomous driving world is not inhabited by a single entity and Tesla is not a monopoly. And yet when it is the first company to come to mind when self-driving vehicles are mentioned - but all that is about to change.

The new record-breaking penalty was announced on Tuesday and is supposedly the largest proposed fine ever in the FCC history. This fine is meant to target Texas-based Rising Eagle for their actions of allegedly spamming consumers in about over a half-dozen states.