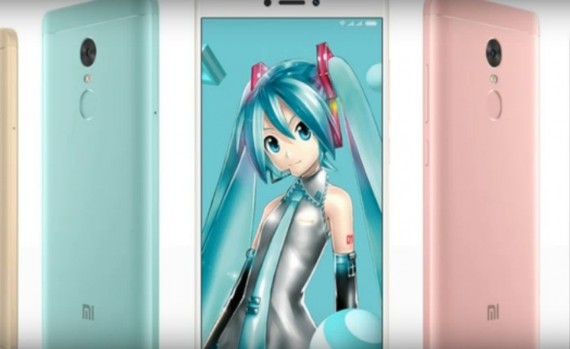 A new upcoming smartphone by Xiaomi, the Redmi Note 4X, has been spotted. It reportedly comes with a Hatsune-Miku-based design that is dedicated to the virtual popstar. But is it enough to overpower Samsung's Galaxy S8? (Photo : NewsHalfVids/YouTube)

Xiaomi has a new phone that is called the Redmi Note 4X. Compared to Samsung's Galaxy S8, how powerful is it? Please do note that the specs listed here for this comparison article will mostly be based on the leaks from Weibo and Evan Blass.

The Redmi Note 4X is expected to be released on Feb. 14 and will only be available in China. Regarding it price, there was no mention how much will it cost, but reports are claiming it to be a "slightly updated" version of the Redmi Note 4. So in my personal opinion, it can be assumed that it will be close to that price range.

The Galaxy S8 is reported be unveiled at the MWC, specifically on March 29 and will likely be released on April 19-21. As for its expected price, it is rumored that it will be $100 more expensive that the Galaxy S7.

If you're a Hatsune Miku fan, then you will probably love the Redmi Note 4X. Aside from having similar designs with the Redmi Note 4, its design is also dedicated to the virtual popstar. Literally, it comes with a Miku color scheme, a Miku protection case and powerbank that is wrapped up in a specially designed packaging.

Based on the recent leaks at Weibo, the Galaxy S8 will have a software-based Home Button, a USB Type-C port, a metal and glass casing design, curved edges, IP68 rating and a 3.5 mm audio jack. As for the Fingerprint Scanner that is said to be located at the right of the camera, recent reports suggest that the allocated space could possibly be for the camera flash.

The Redmi Note 4X will feature a 5.5-inch display with a screen resolution of 1920 x 1080 pixels. It was also noted to feature slim bezels.

As for the Galaxy S8, it is rumored to feature a 5.8-inch super AMOLED display with a screen resolution of 1440 x 2560 pixels. Also in the recent leak that showed only the bottom half of the phone's design, it seems to have a borderless screen with a curved display on the sides.

The Redmi Note 4X will be packing Qualcomm's Snapdragon 625 chipset. For its RAM storage, there is no official release about it yet. However, rumors suggest that it could have 4 GB of RAM.

On the other hand, the Galaxy S8 is expected to come with the Snapdragon 835 or the Exynos 8895 processor, depending on where you buy it. Regarding its RAM storage, it will either be 4 GB or 6 GB of RAM, but most reports are expecting it to be 6 GB.

As for the Galaxy S8, it is rumored to feature a 13 MP rear camera and a 8 MP front-facing camera. In the case of what battery will it have, some say it is 3,000 mAh battery, while other reports say 3,250 mAh.

Based on the information above, I think the Redmi Note 4X is quite a bit underpowered compared to Galaxy S8. But for a budget smartphone (if the price will be close to the Redmi Note 4), I think it is worth the buy. I mean, aside from having a Snapdragon 625 chip, its design is also Hatsune Miku inspired. That alone will make it quite appealing for Anime fans.

So for the final decision whether the Redmi Note 4X is powerful enough to beat the Galaxy S8, I personally don't think it is. But hey, this is my opinion and the official specs and features of both phones have not been announced yet, so I could be wrong.

A new leaked photo of the Galaxy S8 has been spotted at Weibo. It shows the device's bottom half that features an edgeless display, a 3.5 mm headphone jack and much more.

Samsung is asking Murata Manufacturing Company to supply for them batteries for the Galaxy S8, because Samsung was impressed with the reliability and performance of Sony's lithium-ion batteries.