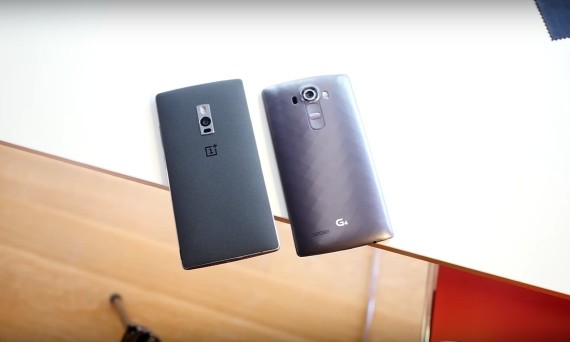 Coming this year is the OnePlus 5 and LG G6, both flagship phones that are said to come with high powered specs and features, which is why it is highly anticipated by tech enthusiasts. (Photo : Android Authority/YouTube)

The OnePlus 5 and the LG G6 are both flagship smartphones that are highly anticipated by many tech fans. The OnePlus 5 is the sequel to the OnePlus 3T and dubbed as the "iPhone 7 Killer," while the LG G6 is the successor to the LG G5.

The OnePlus 5 is reported to be likely launched this April. Its expected retail price has two variations: other reports say $400, while some say $500.

On the other hand, the LG G6 is expected to be unveiled this Feb. 26 at the Mobile World Congress event. This flagship phone is expected to cost around $600.

For the OnePlus 5, there is no information yet regarding what it will look like. As for the LG G6, it's rumored to feature a body dimension of 148.8 x 2.3 x 8.3 mm. With its casing design, alleged photos showed two designs: a glossy finish, while the other is a matte finish.

The OnePlus 5 is said to have a 5.5-inch Quad HD display. It was also suggested that its screen design could possibly be curved.

The OnePlus 5 is rumored to be packed with a Snapdragon 835 chipset. There was no mention as to what OS it will be running, but it would most likely be Android Nougat.

As for the LG G6, initial reports claimed that it was to have a Snapdragon 835 chip, but since Samsung has hogged the first batch of Qualcomm's Snapdragon 835 chips for the Galaxy S8 and S8 Plus, LG has decided to settle for the Snapdragon 821 chip - not the latest, but still high quality nonetheless. Regarding what operating system it will have, the device is said to run on Android Nougat.

The OnePlus is expected to have 6 GB of RAM. However, another source claims that it could be 8 GB instead. As for its internal memory, it is said to be 64 GB and will also have an expandable memory option of up to 256 GB.

The LG G6's internal memory specs are unknown. But according to TechRadar, a minimum of 4 GB is likely possible.

Initial reports claimed that the OnePlus 5 will have a 22 MP rear camera. Now, reports are claiming it to be a 23 MP rear camera partnered with a 8 MP front camera.

On the other hand, the LG G6's camera specs are unknown. However, there are rumors that it will have a dual-lens camera.

OnePlus did say that it won't be offering smaller handsets, because they want its phones to have a 3,500 to 4,200 mAh battery capacity. And according to rumors, the OnePlus 5 will have a 4,000 mAh battery. It is also said to have this "Dash Charge" feature.

Just like its internal memory and camera specs, little is known about the LG G6's battery. The only rumor known regarding its battery spec is that it is removable.

Based on the information gathered, the OnePlus 5 seems to be better. With its pricing, the possible 6GB or 8GB RAM and a Snapdragon 835 chipset is enough to make it the better flagship phone.

LG G6 News And Updates: Flagship To Offer Both Matte And Glossy Finish?

According to the latest leak, the images show that LG G6 is to feature a matte finish, something that differs from the previous leak because of it having a glossy finish. Now tech enthusiasts are confused as to which of the two leaks is legit and what will be the final design of LG G6.

Can The LG G6 Outshine The iPhone 7 Plus And Google Pixel?

The LG G6 is expected to be released next month at the Mobile World Congress trade show in Barcelona. It is expected to feature a new display technology called "QHD+" and other amazing features.