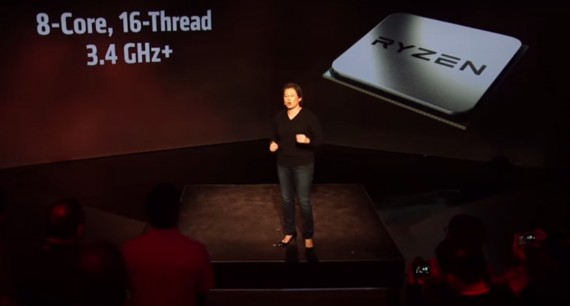 There is yet another Ryzen leak that surfaced online, detailing an extensive lineup of 17 processors that starts with a price of just $129 for the Ryzen 3-1100.

According to Hot Hardware, this latest online leak is really a continuation of a previous leak outing AMD's retail launch lineup from top to bottom. The difference is that now more details have emerged, including TDP ratings for every SKU and individual part numbers. The source of where this information is coming from is unclear, as AMD did not yet officially reveal the details about its upcoming Ryzen CPU lineup.

The highly anticipated launch of AMD's Ryzen processors is expected to happen early next month, so the fantastic performance rumors from leaked benchmarks and the first pricing leaks are hot information. Meanwhile, leaks about the rival Intel's upcoming processors also have been surfacing too. It appears that mid-range Ryzen CPUs will do battle against a rumored hyper-threaded Core i5-7640K Intel processor.

Leaving aside skepticism, if we would have to believe the leaked lists of all 17 Ryzen SKUs, it appears that five are listed as having a 95W TDP, while a dozen of them features 65 TDP ratings. If we corroborate this information with what we know from the previous leak, five of the upcoming Ryzen chips are eight-core processors, four are six-core CPUs and eight of them are quad-core parts. Some of these AMD processors are Black Edition too, including two of the four-core processors, one of the six-core CPUs and two of the eight-core parts.

AMD will bundle with the Black Edition Ryzen processors that have a 95W TDP and updated Wraith cooler codenamed HS81, according to the leak. These Black Edition AMD Ryzen CPUs include the Ryzen 5 1600X, Ryzen 7 1700X and Ryzen 7 1800X. The leaked chart missed to provide any information on clock speeds, except what the source claimed to be inside information on three of the SKUs.

AMD's Ryzen 7 1800X will come with a price tag of $499 and will be clocked at 3.6GHz (base) to 4GHz (Turbo). The CPU will have an Extended Frequency Range (XFR) of 4GHz+ depending on cooling and will feature 8 cores and 16 threads. If temps allow for it, the XFR feature is able to automatically overclock the processor past its Turbo clock.

These performance numbers indicate that AMD's Ryzen CPUs will indeed be a match in both performance and price for Intel, being yet another worrying sign for the leading chip maker. It's looking like AMD will be, in fact, able to outperform Intel in most areas, sometimes by significant margins. While this might be worrying for Intel and for a good reason, on the other side this is great news for the consumer.

According to Forbes, several websites have also pointed out the impressive performance of the 8-core, 16-thread Ryzen 7-1700X compared in early benchmarks with a number of competing Intel CPUs, even if tested on an entry-level motherboard. The benchmarked AMD Ryzen CPU was tested using relatively slow memory and with the AMD's turbo-mode/Precision Boost not working. The latter could have a huge impact on performance, so this means that these are worst-case numbers.

What Do We Know So Far About Upcoming AMD Ryzen Processor?

According to a leaked review, the upcoming AMD Ryzen processor beats the $1000 Intel Core i7-6900K.

The release date of AMD's Ryzen highly-anticipated new processor will be revealed in an online leak.

Intel has just confirmed to launch its latest Coffee Lake chipsets on Aug. 21.

The much awaited AMD Vega graphics cards were officially unveiled SIGGRAPH in LA. However, now it is said that this is the last GPU from AMD.