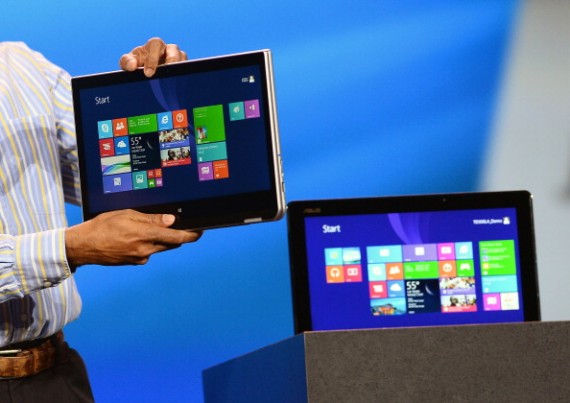 LAS VEGAS, NV - JANUARY 06: A pair of Lenovo 2-in-1 laptops and tablets are displayed during a keynote address by Intel Corp. CEO Brian Krzanich at the 2014 International CES at The Venetian Las Vegas on January 6, 2014 in Las Vegas, Nevada. CES, the world's largest annual consumer technology trade show, runs from January 7-10 and is expected to feature 3,200 exhibitors showing off their latest products and services to about 150,000 attendees. (Photo : Ethan Miller/Getty Images)

While it used to be that individuals would have to purchase a unit from every tech segment in existence in order to experience the complete experience, this is no longer the case. More and more, members of the public have begun to embrace 2-in-1 technology, the most popular of which is a hybrid between a tablet and a laptop. And while Microsoft has arguably ruled this market with its Surface Pro and Surface Book devices, there are some very notable alternatives such as the HP EliteBook x360, the Toshiba Portege X20W and the Dell Latitude 7285.

As CIO has reported, HP took the best of its technology from the familiar and widely popular EliteBook and added the hinge of its Spectre x260, which make up the HP Elite x360. It was this partnership that allowed the device to rest against the back of the keyboard. The company has also confirmed that the unit will have an optional 4K UHD display and that it will be the thinnest and most secure hybrid in the market.

The EliteBook x360 has a 13.3-inch multi-touch display and an interesting security feature. It has the HP Sure View mode, which tints the screen to anyone around the user, much like a privacy screen only it is built directly into the screen. It will also have two USB 3.0 ports, a microSD port, and HDMI port and a USB Type-C port.

Meanwhile, the Toshiba Portege X20W was designed specifically for work around an office. Like the EliteBook x360, it features a 360-degree rotatable display that can rest directly against each other as opposed to a detachable keyboard. It is powered by a seventh generation Intel Core processor, as well as Windows 10 Pro.

The Toshiba Portege X20W has a smaller 12.5-inch multi-touch display with a Full HD touch-screen display. The only obvious drawback is that users will need an adapter in order to charge and connect to an external display at the same time, as there is only one USB 3.0 port and a USB Type C port that can support Thunderbolt 3 connections as well. The company is scheduled to release the Toshiba WiGig Dock and the Tunderbolt 3 Dock later this quarter to solve this problem.

Then there is the Dell Latitude 7285, which the publication reported that resembles the Microsoft Surface Book line. The keyboard does not magnetically connect, but instead, docks into a solid keyboard base, which arguably provides owners a more authentic notebook feel. But it does offer one thing that the Surface Book has thus far not featured - wireless charging.

The Latitude 7285 features the latest Kaby Lake processor chips and has a 3K display resolution. The company will also offer a variety of different keyboards to match the wants and needs of its consumer base. The item is scheduled to start shipment within May or June.

Laptop Mag has reported that tablet sales have dropped as much as 30 percent since it peaked in popularity back in 2013. From 2015 to 2016 alone, the market suffered a 15 percent decline in sales. As such, purchasing a more versatile 2-in-1 device like the ones described above would be a smart investment to make at this point.

The best gaming computers, such as the Volta V, need not be intimidating in terms of aesthetics in order to provide the necessary power that will deliver a good gaming experience.

What The MacBook Air 2017 Will Look, Feel & Perform Like - If Apple Continues The Line

The MacBook Air is in danger of extinction unless Apple starts to find value in the product line again. One more update might be enough to prove its worth.

Both the Surface Pro and Surface laptop have now gone under the knife in iFixit's obligatory tech teardown.

The new iPad Pro from Apple is s good you may want to get rid of your Microsoft Surface Pro.