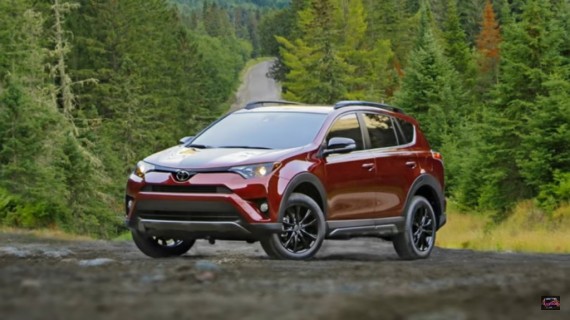 The 2018 Toyota RAV4 will be available in “Adventure” model, which will be equipped with a whole lot of features that give it an off-road worthy capability. (Photo : Autogo/YouTube)

The 2018 Toyota RAV4 has finally made its debut at the 2017 Chicago Auto Show and it showed one vehicle that is ready to take on off-road challenges. Do not get carried away however, the 2018 Toyota RAV4 is an off-road SUV alright but it is designed only to go for light off-road adventures.

The 2018 Toyota RAV4 is not just any other SUV you will find on the road. According to Motor Trend, the 2018 Toyota RAV4 will be available in "Adventure" model, which will be equipped with a whole lot of features that give it an off-road worthy capability. You can choose between the front wheel drive (FWD) setting paired with a limited-slip differential or simply go for the all-wheel drive (AWD) configuration for its drivetrain. A tow prep package along with additional engine coolers, upgraded radiator and transmission fluid are also standard in the Adventure model. To make the deal sweeter, the 2018 Toyota RAV4 Adventure has better ground clearance, which allows you to tackle more rugged terrains.

Since the 2018 Toyota RAV4 Adventure is built to be taken into the wilds, it only makes sense that its interior is also dressed in the appropriate manner. According to CNET, the 2018 Toyota RAV4 Adventure has unique trim pieces in the cabin along with an all-weather cargo and floor mats. Its door sills also scream "adventure" and its shift knob looks awesome with its leather wrap. Here's another interesting thing about the it. Say, you are camping out somewhere in the woods, there is a 120-volt power outlet is available for you in the cargo area of the 2018 Toyota RAV4, if you or someone with you happen to have brought a couple of entertainment gadgets.

Needless to say, you really won't be flooring any gas pedal when you are trying to cross a shallow river or crawl on bigger rocks to get to your off-road destination. That being said, the 2018 Toyota RAV4's powertrain may not appear quite impressive but it does get the job done. According to Car and Driver, the 2018 Toyota RAV4 Adventure is powered by a 2.5-liter four-cylinder engine that puts out 176 horsepower and 172 pound-feet of torque. There's more than enough power there to take you to where you want to go.

The 2018 Ford Expedition may just be the most versatile vehicle in the market today as it shows characteristics of not just an SUV but also that of a minivan and a tow truck in one package.

Chevrolet showcases nine of its models that will be receiving a Special Redline Edition this year at the 2017 Chicago Auto Show.

The 2018 Dodge Challenger SRT Demon's latest teaser is out and it suggests a supercharger powertrain for the upcoming Demon.