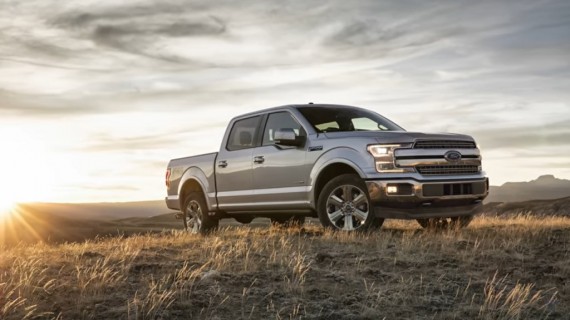 Ford is finally giving us an F-150 with diesel engine in its 2018 model (Photo : Town and Country TV/YouTube)

It is no secret that many of us have been yearning for Ford to bring us a diesel-powered engine for its F-150 and it would seem like the automaker has finally heard our voices. According to CNET, the 2018 Ford F-150  will have a 3.0-liter Power Stroke diesel engine option when it arrives in the market. Unfortunately, there are no details revealed yet regarding how much horsepower the diesel engine can generate and the same is true when it comes to the torque. However, given the fact that the F-150 is easily one of the most powerful pickup trucks in the segment, we expect that its future diesel powertrain will be no less competitive than its petrol counterparts.

If you are no fan of diesel, the 2018 Ford F-150 will still be something you would look forward to as its other powerful engines that brought it fame will also be returning like kings. It would seem that the 3.3-liter V6 engine that cranks out 282 horsepower and 253 pound-feet of torque will be once again be fitted in the 2018 F-150  as its standard powertrain.

In addition, the 3.5-liter EcoBoost engine will also return along with the legendary 5.0-liter V8, which is said to be receiving another power upgrade when it arrives. Of course, we're just going to wait a little bit longer before we find out just how much stronger it will get. As for the 2.7-liter EcoBoost engine, reports state that it will also gain better efficiency and power due to the dual-port and direct-injection technology that will be introduced to it. Lastly, the 2018 Ford F-150 and all of its engines, except for the 3.3-liter, will be paired with the new 10-speed transmission that has been developed by the automaker along with General Motors.

If you find the current model of the Ford F-150 cool enough already, you will most likely find the next model to be way cooler. According to a report, the 2018 Ford F-150 will no longer be sharing the same platform as the one used in the automaker's larger pickups but it will still get a Super Duty truck appearance.

Fortunately for us in this regard, Ford has already revealed what the forthcoming F-150 would look like. Some of the most notable features are the twin-bar grille that is usually found only in Super Duty trucks. This is paired with new headlamps that allow for the new F-150 to look meaner. Find your way to the rear section and you will also find the looks fit for the latest truck.

The 2017 Ford F-150 is already one mean machine in all sense of the word and Ford has basically promised us a more beefed up version of it. That being said and given the fact that Ford has always delivered on its promises, we can certainly set the bars of expectation high for the 2018 F-150. Of course, there are many other reasons why you should look forward to the latest F-150 but revealing them all in one go would squeeze all the excitement out of it. Let's save some for later, shall we?

The 2018 Dodge Challenger SRT Demon's latest teaser is out and it suggests a supercharger powertrain for the upcoming Demon.

Chevrolet showcases nine of its models that will be receiving a Special Redline Edition this year at the 2017 Chicago Auto Show.

The 2018 Ford Expedition may just be the most versatile vehicle in the market today as it shows characteristics of not just an SUV but also that of a minivan and a tow truck in one package.