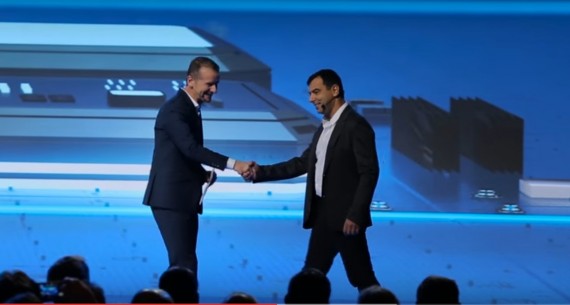 Volkswagen announced that it will integrate on its cars Mobileye's camera-based localization and mapping technology. This will begin in 2018.

According to Street Insider, starting in 2018, Mobileye and Volkswagen are planning to implement a new navigation standard for autonomous driving. The system will allow the two companies jointly collect and share real-time data from new Volkswagen vehicles equipped with the technology. Future Volkswagen vehicle models will use the camera-based localization and map technology from Mobileye called Road Experience Management (REM).

The agreement has been signed by representatives of the two companies on Friday, Feb. 10. The wide-ranging cooperation was approved by Dr. Herbert Diess, Chairman of the Board of Management of the Volkswagen brand and Professor Amnon Shashua, Chairman and Chief Technology Officer of Mobileye. With this partnership, the two companies are taking the next step towards developing a fully autonomous driving technology.

A new generation of highly intelligent maps will be used in the future data collected jointly by the two companies. The Israel-based company Mobileye is already known as one of the leading manufacturers of technologies in the world for accident prevention and autonomous driving. The company has become a well-known sensor systems supplier due to its previous collaboration with Tesla.

One of the latest Mobileye systems is called REM. The sensor system is using crowd-sourcing data from many vehicles in order to generate real-time data for acquisition of high-definition track data and precise localization. REM is considered as an elementary information level for self-driving technology.

In practice, the Volkswagen cars equipped with front cameras acquire road information and lane markings via optical sensor systems from Mobileye, then send this information into a cloud in a compressed format. The continuous improvement of high-definition navigation maps with highly precise localization capability is based on using this fleet data. This technology serves as a foundation for the advanced development of many assistance systems, as well as autonomous driving.

The Volkswagen agreement with Mobileye is a turning point, as it provides a framework for industry-wide cooperation between carmakers to produce jointly the needed map contents for autonomous driving. The agreement is, in fact, the first of its kind, giving the possibility to merge data of different automobile manufacturers worldwide in order to create a single high-definition world map. Tech experts expect that this will form an industry-wide standard.

The Volkswagen vehicles equipped with sensors to monitor the surroundings can be now utilized to obtain various environmental data related to road conditions, traffic flow, and available parking places. This highly up-to-date information can be made available in higher-level systems. It is expected that more will be able to utilize this information, making car driving and mobility easier with greater comfort and convenience overall.

Shares Of Mobileye Are Soaring

According to Fortune, during trading on Monday, Feb. 13, shares of Mobileye rose more than 8 percent, hitting at one point a high of $47.22. This is a direct result of the announcement of a partnership between Volkswagen and Mobileye. The Israeli-based startup makes vision chips and software that interprets data from cameras in order to anticipate possible collisions with animals, people, cars and other objects. Mobileye's sensor systems are already used by nearly two dozen automakers, including Ford, General Motors, BMW and Audi.

Before the two companies dramatically parted ways last year, Tesla was also a customer of Mobileye. For the Israeli-based startup, this alliance with Volkswagen is the second to focus on self-driving vehicles. Intel, BMW and Mobileye announced a partnership in July 2016 to develop autonomous driving technology as an open platform and produce self-driving cars by 2021.

Mobileye To End Collaboration With Tesla On Autopilot Technology

Mobileye has announced the end of Autopilot technology collaboration with Tesla.

Waymo Is Looking For Partnership To Cut Self-Driving Tech Costs

Waymo is seeking a partnership for mass-production of its self-driving tech in order to reduce costs.

A bonafide 5G wireless network that moves massive amounts of car sensor data between cars and the cloud makes a power-efficient deep learning system and maps that change in real time.

Volkswagen is starting to bounce back from the results of its diesel emission scandal as profits soar in this year's first quarter.