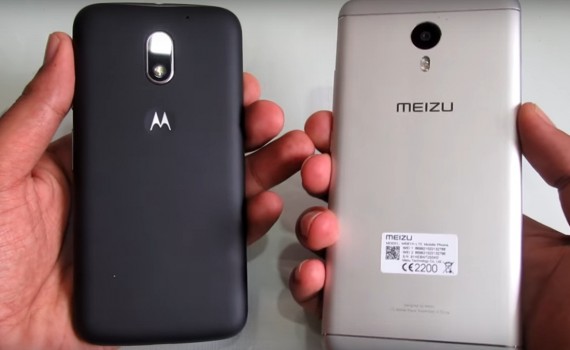 The Meizu M5s, Moto G5 and G5 Plus are mid-range smartphones set to be released this year. Here are the latest leaks regarding the three devices. (Photo : nabeel nawab/YouTube)

This year, mobile industry is at its usual business as the market is set to see a plethora of upcoming offerings in the mid-range segment, such as the Meizu M5s, Moto G5 and G5 Plus. Though these are said to be "mid-range phones," that does not mean they are not worth buying. As they say, today's mid-range was yesterday's flagship. So, what do we know so far about these three phones based on the latest leaks?

According to an article at Slash Gear, the Meizu M5s is said to cost around 799 RMB in China, which translates to $117. As for the Moto G5 and Moto G5 Plus, that information is still kept under wraps.

There is no information yet about Meizu M5s' availability in the market, especially in the U.S. As for the Moto G5 and G5 Plus, a report in Uber Gizmo suggests that more information regarding these two phones will be known at the upcoming Mobile World Congress event.

The Meizu M5s is said to feature a premium look with a uni-metal design born out of laser assisted CNC fabrication. It will have smooth edges, Meizu's mTouch fingerprint scanner that has a speed of 0.2 seconds and color casing designs available in gray, silver, champagne gold and rose gold. As for the Moto G5 and G5 Plus, it is still unknown.

The Meizu M5s is rumored to run on Android 6.0 Marshmallow with Flyme 5.X. It will be packing a MediaTek MT6753 processor clocked at 1.3 GHz.

The Moto G5 will have Qualcomm's Snapdragon 430 while the G5 Plus will have a Snapdragon 625 chipset. Both smartphones are expected to run on Android 7.0 Nougat.

The Meizu M5s is said to feature an internal memory storage of 16 GB with 3 GB of RAM. It will have an expandability memory option of up to 128 GB.

As for the Moto G5, it will have a built-in memory of 32 GB while the G5 Plus will have 64 GB. Both smartphones are said to carry 2 GB of RAM and an unspecified expandable memory option.

The Meizu M5s is expected to be powered by a 3,000 mAh battery with the staple mCharge fast charging feature. According to Meizu, it can charge from zero to 58 percent within 30 minutes.

The Nokia 3, Nokia 5 and Nokia 3310 (2017) are handsets that are set to be announced at the upcoming Mobile World Congress event in Barcelona.

Moto G5 News, Update: Smartphone To Be Cheaper Than The Moto G4?

The Galaxy S8, S8 Plus and Moto G5 Plus are high-end smartphones expected to be released this year. With all the leaks coming out regarding their specs and features, what do we know so far?

The Moto G5 Plus is due to become available in a new blue color, according to known tipster, Roland Quandt.

Vivo V5S VS Moto G5: Which Budget Smartphone Can Impress You With Its Camera?

Both Vivo and Motorola have expanded their smartphones' capabilities while staying budget-friendly. With its low price point, which of these two has impressive camera capabilities?