For Honor Tips And Tricks: How To Dominate The Battlefield Using Shugoki 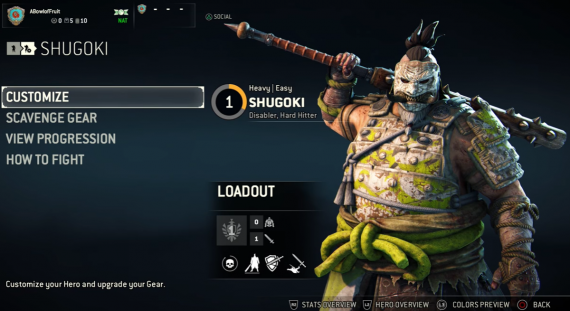 Shugoki can basically one-shot any opponent regardless of its HP. In order to maximize this samurai, here are the best tips and tricks about the hero. (Photo : Mr. Fruit Gaming Channel/Youtube)

For Honor has just been released and it has already gained a lot of attention for both casual and competitive players looking for some medieval actions. For those that are new to the game, you may be fairly acquainted by the Shugoki, the heavyweight samurai. Although the hero is deemed to be an easy hero to play with, it's actually a lot harder once you're faced with indomitable foes. As such, one must heed advice to the growing competitive players in the community such as the one that will be highlighted in todays For Honor guide. Here's how you can dominate the battlefield using Shoguki.

For Honor Tips and Tricks: How To Play Shugoki

One of the rising talents in For Honor is the player named TrU3Ta1ent who seemed to find a workaround Shugoki in dominating all heroes in the game. According to the player, Shugoki is one of the strongest characters in the game as he can basically one-shot any character regardless of its health once the hero's HP is in critical level. To grasp the threat of the hero, let's first check out its strengths and weaknesses.

Uninterruptible Stance - One of the endearing qualities of Shugoki is his Uninterruptible Stance which enables him to absorb an enemy hit without causing an interruption. This also means that you can chain light and heavy attacks even when the opponent successfully blocks either one of them. Spamming basic attacks can open up a myriad of combos which we will be tackling down below.

Headbutt - This is one of the most feared combos of Shugoki. Doing a heavy attack followed by a guard break executes a headbutt. This move doesn't deal massive damage but it drains a significant amount of stamina from the enemy. Headbutt is best used against players that are adept at parrying (especially against Shugoki's massive club). Once the opponent's stamina is depleted, they are highly susceptible to devastating attacks such as the feared Demon's Embrace.

Demon's Embrace - This is a unique move of Shugoki wherein if Shugoki's health is in critical level, the move is guaranteed a one-shot kill on any hero regardless of its HP. This move is a great follow up with the Headbutt as once the enemy is staggered, landing Demon's Embrace is just a cake walk.

Uninterruptible Stance - The downside of this skill is that, once the ability has been depleted, Shoguki takes extra damage from all attacks. The cooldown of this move takes even longer once Shugoki is low on Stamina.

Headbutt - Since performing the Headbutt is initiated upon a heavy attack, Shoguki is basically open during the entire animation of that attack which means that for those mobile heroes, they can simply parry and or counterattack you during such instance. The best time to perform a Headbutt is chaining it with light attacks during uninterruptible stance. Incorporating a heavy attack during the sequence will yield higher results than simply spamming the latter.

Demon's Embrace - For those that have been playing with or against Shoguki, you're very much aware of the attack animation of this move. Basically, the main weakness of this skill is that it is easily noticeable which means it's a lot easy to dodge. The best way to ensure that this ability will hit your opponent is when their stamina is low or when you throw your opponent onto a wall. The latter will guarantee a Demon's Embrace hit.

Shugoki is undeniably strong in the battlefield but the hero can be easily punished once he is out of position and during in-between of his attack sequences (since he is really slow). Last tip: try to intimidate your opponent and slowly push them near a wall in order to secure a Demon's Embrace hit.

For Honor Guide: How To Farm Steel Easily

Steel is one of the most vital resources in For Honor. For those that are looking to improve their gears faster, here is the best way to farm steel in the game.

Here are the reasons why you should start saving as early as today.

Interestingly, a new update has been brought to For Honor thanks to Ubisoft. Check it out here!

Ubisoft has released a new set of Elite outfits in For Honor. Check them out!

'For Honor' Is Experiencing The Same Downfall With 'The Division'

Unfortunately for Ubisoft, "For Honor" player pool continues to decrease. Check out the full details here!

Ubisoft Finally Drops The Hammer, Kicks Out Rage-Quitters In For Honor

Finally, the Penalty System for quitters in For Honor has been activated.