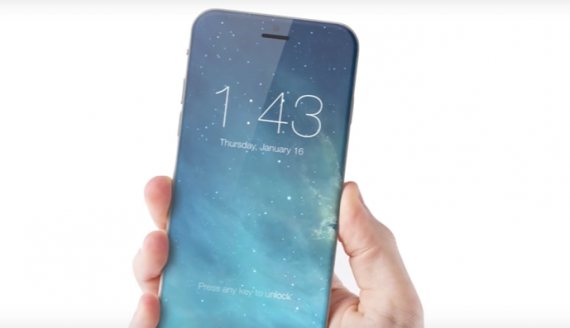 The possible addition of an OLED display in the iPhone 8 is about more than just a brighter screen. The choice, if made, will allow space for several other features. (Photo : SuperSafTV/YouTube)

The public is still some months away from iPhone 8's biggest reveals, but the web is already circling with rumors about what will be the tenth anniversary iPhone. Most recently, reports have been touching on the possibility of Apple finally installing an OLED display in its signature handheld. And while this will provide a better display, there is more to it than that.

The idea of a different screen may not be that exciting to most individuals, especially those that already love the Apple display. However, The Financial Review has noted that there are several other features that are made possible just by the installation of an OLED display. So the idea is not just that there will be a new screen to look at, but that this alone opens a window of different possibilities.

The main difference between Apple's standard LCD screen and an AMOLED display is the presence of a backlight. LCD screens have this, which means that there is an additional layer to the handhelds. Conversely, AMOLED displays lack the same and the pixels are lit up whenever electricity hits them. Because of this, devices with an AMOLED screen tend to be thinner.

But as the publication explained, AMOLED screens are capable of more control over each individual pixel, which theoretically provides better contrast for the viewers. And because of the lack of a backlight, these devices also tend to be more energy-efficient, as pixels that are not necessary can be shut off and stop draining the phone's battery. This could lead to better battery life as well.

But the actual production of AMOLED screens is not an easy one, especially at the rate and number that Apple produces its phones. And with all the hype surrounding the iPhone 8, there is no question that installing AMOLED displays on each unit is a daunting task. Which is why out of the three models that Apple is expected to release, only the highest-end model is estimated to arrive with the updated screen.

However, there is still the question whether or not Apple will still be able to meet the demand on the AMOLED display iPhone 8. The estimated price of the same, however, is likely to curb this demand. At this point, the iPhone 8 is estimated to be priced over US$1,000.

Tech Crunch has noted that KGI Securities analyst Ming-Chi Kuo, who has been right about several of his speculations, Apple will release a 5.8-inch model with an OLED display. In doing so, the Cupertino tech giant will eliminate the bezels around the screen so that the device appears to be just one giant screen. The bottom, however, will leave space for virtual buttons, which are expected to act very much like the Touch Bar found on the MacBook Pro.

The Touch ID will likewise be featured via fingerprint sensor beneath the screen. The publication continued on to say that the screen is likely to be taller than it has before, which will theoretically be easier to use and maneuver. But until Apple makes an official statement, the public will never be sure about what the iPhone 8 will actually look like.

Apple Teams Up With Broadcom For iPhone 8 Wireless Charging

Though there is already a lot of speculations about the upcoming iPhone 8, there has not been any tangible proof. But wireless charging might actually become a reality if recent partnerships are to be believed.

Apple Shares At An All Time High: Positive Trend For The iPhone 8

Contrary to popular knowledge, Apple is doing better than it has in the last few quarters. And while this is generally a good thing for the company, it is also great news for the sales of its upcoming iPhone 8.

What The MacBook Air 2017 Will Look, Feel & Perform Like - If Apple Continues The Line

The MacBook Air is in danger of extinction unless Apple starts to find value in the product line again. One more update might be enough to prove its worth.

Here's a hack to make the most out of your Macbook Pro.

The new MacBook Pro is getting a $600 GPU! Could this be better or worse than the previous Radeon Pro Vega II GPU?