Apple Teams Up With Broadcom For iPhone 8 Wireless Charging 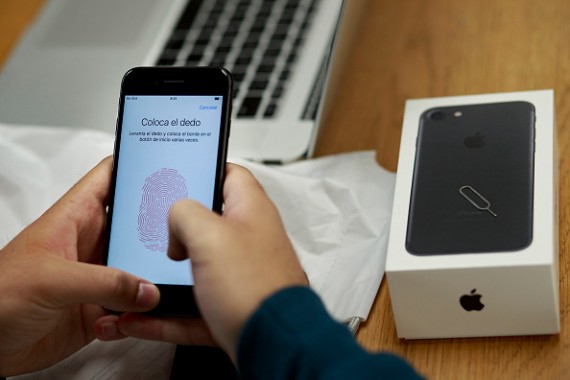 MADRID, SPAIN - SEPTEMBER, 16: A customer sets the Touch ID of his new Iphone 7 at Puerta del Sol Apple Store the day the company launches their Iphone 7 and 7 Plus on September 16, 2016 in Madrid, Spain. The iPhone 7 and iPhone 7 Plus has been launched on Friday September 16th in more than 25 countries. Customers have started to queue 38 hours before the opening of the store placed in the center of Madrid. (Photo : Gonzalo Arroyo Moreno/Getty Images)

Almost immediately after the iPhone 7 and iPhone 7 Plus were released, there were already talks about how the iPhone 8, Apple's tenth anniversary iPhone, would look, feel and act like. One of the biggest and most popular rumors is that the upcoming handheld will come with a wireless charging feature. But up until now, there has been no tangible proof of the same.

According to CNBC, who cited JPMorgan analyst Harlan Sur, Apple is working with Broadcom to create a customized wireless charging system. Sur went on to further claim that the partnership has actually been going on for years, and the technology likewise developed. However, he also cautioned that the feature might not go live in the iPhone 8.

Last year, the tech world was shocked when news of the Samsung Galaxy Note 7 explosions made its rounds. It was ultimately reported that the cause of the explosions were the batteries and the Korean tech giant had to recall all the shipped units as a result. It is this caution with batteries at this point in time that might stop Apple from including a wireless feature in the iPhone 8. Indeed, now might not be the smartest time to experiment with handheld batteries.

The public has generally gotten more critically and more cautious about batteries that are too powerful for a handheld device. It does not help either that the issue featured one of the largest tech companies in the world. So if Apple is seriously considering wireless charging, the technology would have to be properly and strictly tested multiple times before ever getting in the hands of the public.

Nevertheless, the news is directly in line with previous leaks as well. The publication noted that famed Apple analyst Ming-Chi Kuo has gone on the record to say that he is expecting three models of the upcoming iPhone 8 to have wireless charging features. Furthermore, Apple has confirmed that it has joined the Wireless Power Consortium.

On the front design, the idea of wireless charging makes sense as well. The iPhone 8 has long been rumored to be of a glass design, with an edge-to-edge display that hides the home button beneath the screen. It is likely that the wireless feature will be added in order to continue the flawless finish of the anniversary iPhone.

Sur went on to say that a glass back cover would be ideal for wireless charging as the material would reduce signal interference. "It is possible for Apple to add proprietary features such as fast charging or extended charging to differentiate itself from the pack and enhance the value of its own hardware ecosystem," he said.

Investors.Com has noted that this technology, fulfilled with the upcoming handheld, will lead Broadcom to massive benefits. Theoretically, the wireless charging design win will add anything from US$500 million to US$600 million in revenue. However, neither Broadcom nor Apple have gone on the record to confirm whether or not wireless charging will be part of the iPhone 8. Nevertheless, the Cupertino-based company is expected to make the official announcement on September this year.

Apple Shares At An All Time High: Positive Trend For The iPhone 8

Contrary to popular knowledge, Apple is doing better than it has in the last few quarters. And while this is generally a good thing for the company, it is also great news for the sales of its upcoming iPhone 8.

In the Android-powered smartphone world, Google and Samsung took the lead in 2016. But as the Korean company already has a target on its back, it has some larger obstacles to cross for supremacy.