5 Common Samsung Galaxy Nougat Problems & How to Fix Them 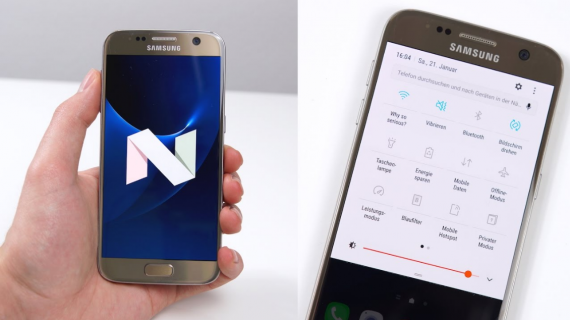 The Samsung Galaxy Android 7.0 Nougat update is causing problems for the users of Galaxy S7 and Galaxy S7 Edge and today we want to provide some simple remedies to end these difficulties. (Photo : SwagTab/YouTube)

Samsung officially releases and updates its Galaxy S7 having an Android 7.0 Nougat beta version and it’s rolling out to devices around the world. And while many owners are enjoying the bump up from AndroidMarshmallow, others are running into problems with their version of Android 7.0 Nougat. And users are telling that the Android update on Samsung Galaxy S7 and S7 Edge is far from perfect.

Just recently, Samsung rolled out a bug fix update to the Galaxy S7and S7 Edge to address some bugs as well as performance issues. Despite the company's efforts, many users are still experiencing problems with their handsets. With the help of GottaBe Mobile, here are the 5 common Samsung Galaxy problems and how to fix them.

Issues on installations are fairly common especially on handsets under the Android operating system. There are a few things you can try in an attempt to jumpstart your Nougat install. If you get stuck while downloading, try pausing or restarting it. If that strategy will not work, you might want to check your internet connection. You need to be connected to a high-speed Wi-Fi network when you install Android 7.0 Nougat on your Samsung Galaxy smartphone.

If you think and you are positive that it’s not a problem with your Wi-Fi connection, try restarting the smartphone. If your handset is completely frozen you can't do anything, try to press and hold the Power button together with the Volume down key at the same time for more than 7 seconds. If this move will not also work, bring your handset to the nearest official store that may help you.

Unusual battery drain is an extremely common problem for Android users and we’re seeing various complaints from the Galaxy smartphone users especially who installed the Andriod Nougat. If it happened that you installed Android 7.0 Nougat within the past two days, just give your handset another day or two. Sometimes, the operating system can take a couple of days for the battery to sink in. If after two to three days of waiting and the battery of your Samsung Galaxy is still behaving poorly, you’ll want to take action.

One of the many effective moves to fix this problem is to find the applications that might be eating up the battery life of your handset. Either a stock app that came on it or a third-party app downloaded from the Google Play Store, there is a big possibility that a rogue app will put a huge scratch in battery life. Consider deleting those apps and find an alternative for it or always quit the application after using.

If you are experiencing Wi-Fi issues on your Samsung Galaxy smartphone after installing the Nougat version, do not worry, we have the solution for you. First, unplug your router for a minute or so. Then, plug it back in and check the Wi-Fi connection on your mobile device. If you can’t do this step because you’re in a public place, or if you’re sure it’s not a router issue, try heading into the Settings and look at your stored Wi-Fi connections. From there, Forget the network that’s giving you problems and connect again by reentering the Wi-Fi password to make sure you have it correctly.

Problems concerning Bluetooth to any smartphone devices are one of the common problems, according to Express. To fix this, try turning the Bluetooth of your handset off and on. Believe it or not, this has really worked for almost all the users and it might also work for you. If it doesn’t, go to your device’s Settings and forget all the Bluetooth connections and select the only one connection you might want to connect. In this case, the history will be clear and that will make the Bluetooth act normally.

If your smartphone starts randomly rebooting, there are some ways to try before getting in contact with Samsung or your service provider. First, try to restart your device. If you haven’t done restarting it in awhile, this might be effective but if doesn’t help, try updating your applications. You might want also to clear App Data and Cache. For you to do that, go into Settings menu and then Applications.

The Samsung Galaxy S8 codenamed as SM-G95, and the Galaxy S8 Plus, with codename SM-G955, will launch in colors of Black, Gold and Orchid Gray. The smartphones will seemingly cost $950 and $1,050, respectively.