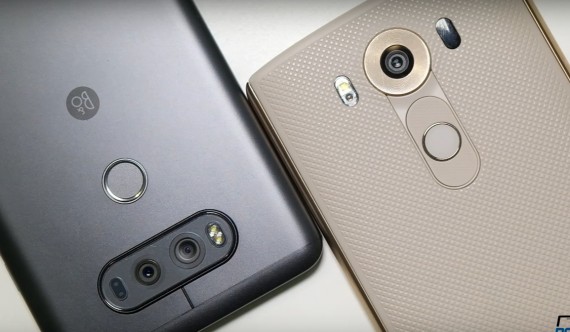 Though the LG G6 is a smartphone that is worth praising for its rumored amazing dual camera specifications, it pales in comparison to the LG V30 rumored specs and features. (Photo : Pocketnow/YouTube)

There is no doubt that the LG G6 will be a powerful device that is worth praising, especially for its dual-camera setup. However, given that a rumored LG V30 is also making its way this year, one can help but think that with its rumored specs and features, it could actually be LG's true flagship phone of 2017. So, what makes the LG V30 more powerful than the LG G6?

It is no secret that the LG G6 will be packing Qualcomm's 821 chipset. To be honest, when I first heard it, I was surprised as to why. That time, it was reported that LG was playing it safe or rather not wanting to delay the schedule for the LG G6, even though the Samsung had first dibs on the first batch of the Snapdragon 825 chips. However, recent reports are suggesting that the rumored upcoming LG V30 could feature a Snapdragon 835 chipset. If this is true, then it makes the LG G6 a slightly less powerful smartphone compared to the LG V30

Based on the recent leaks, reports suggest that the LG V30 will have 6 GB of RAM, this is two points higher than the reported RAM capacity that the LG G6 will have, which is only 4 GB RAM with 32 GB base storage.

Though it was expected that the LG G6 will have a dual camera setup, just like what was seen on the LG G5 and LG V20, the LG V30 will have something even better. No, the company is not planning to follow the footsteps of the iPhone 7 Plus' dual rear camera setup or of the Huawei P9. Instead, LG plans to push the boundaries further of the dual-rear camera set-up of its own, which was seen on its previous flagship, into a double-sided dual-camera setup - yes, dual cameras at the back and front.

Now, to give you an idea of how powerful the LG V30 is compared to LG G6, the LG G6 is said to feature 100-degree front camera and a 13 MP 125-degree dual rear cameras. In regards as to the 13 MP dual cameras, one camera will be used for super wide-angle shots while the other for taking regular angle shots.

For this part of the comparison, this is just an added little extra that is not totally sure and could be either true to its claims or rather false, but I think it is worth pointing out. First of all, according to an article at Indian Express, the LG V30 will come with an upgraded version of the Quad-DAC compared to the LG V20. So, what is Quad-DAC? Well, first, DAC stands for Digital to Analog Converter, and it is the electronic block/component/module/device that will take the digital audio signal and convert it into an analog signal that goes to an Amp, then to a speaker for listening. In simple terms, this will make the sound output of the device crisper, because its users will be able to hear more separation between instruments, easy pick out different instruments and be more immersed in the music.

However, it is also reported by The Verge that the LG G6 will feature an ESS-designed 32-bit quad-DAC system, as an upgraded version of the system that was featured in the LG V20. Now, what I'm trying to ask is that: Will the LG V30 have the same "upgraded Quad-DAC version" of the LG G6?

Expected this year are the LG V30 and Asus Zenfone 3 Go; LG's 2017 phablet flagship and Asus' mid-range phone from its Go line. Here are the latest news and leaks of the said phones.

LG G6 News And Updates: Flagship To Offer Both Matte And Glossy Finish?

According to the latest leak, the images show that LG G6 is to feature a matte finish, something that differs from the previous leak because of it having a glossy finish. Now tech enthusiasts are confused as to which of the two leaks is legit and what will be the final design of LG G6.

LG is all geared up to reveal its all new LG V30 flagship smartphone at the IFA event this year.

LG has revealed that the upcoming V30 will boast an aperture of f/1.6 and will come with the 'clearest' lens ever on a smartphone.