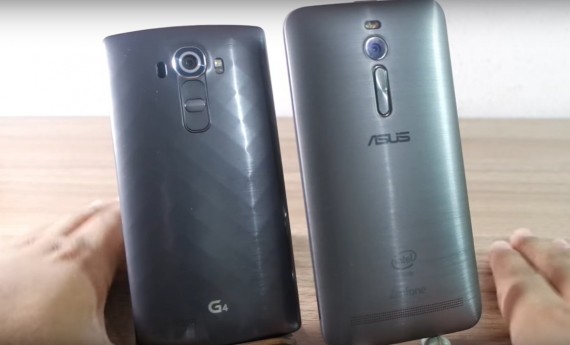 Expected this year are the LG V30 and Asus Zenfone 3 Go; LG's 2017 phablet flagship and Asus' mid-range phone from its Go line. Here are the latest news and leaks of the said phones. (Photo : ARTHUR Tech/YouTube)

The LG V30 and Asus Zenfone 3 Go are two upcoming smartphones expected to be released this year. Though the Asus Zenfone 3 Go is a far cry of being considered as a flagship phone, it packs some decent specs for a mid-range phone. In fact, it is rumored as a device worth buying as a budget-friendly smartphone. So, what are the latest news and leaks about these two amazing devices?

The LG V30's expected retail price is still being kept under wraps. As for the Asus Zenfone 3 Go, the latest leaks suggest that it could cost around 150 Euros , which roughly translates to $159.

As per Trusted Reviews, it is expected that the LG V30 will launch at a similar time with the iPhone 8, which also means that LG will be able to capitalize on the pre-Christmas spending. On the other hand, the Asus Zenfone 3 Go is rumored to be launched at the upcoming Mobile World Congress (MWC) event.

The LG V30 is rumored to come with a much better upgraded Quad-DAC compared to the LG V20. Meanwhile, the Asus Zenfone 3 Go is said to feature a metal unibody with its antenna band visible at the rear top and bottom cover.

Speaking of the back design, the Asus Zenfone 3 Go will sport a rounded rear camera lens that is located at the top left with a flash unit below it. There also seems to be an absence of a rear fingerprint scanner or any sort of physical button. On the front design, there are also no physical buttons and instead features capacitive keys.

As of now, there is no info yet as to what the display specification the LG V30 will have. Meanwhile, the Asus Zenfone 3 Go is reported to feature a 5-inch display with a 720 x 1280 screen resolution.

The LG V20 is expected to be packed with Qualcomm's Snapdragon 835 chipset, while the Asus Zenfone 3 Go will come with a Snapdragon 410 chip. As for the OS of both devices, there is no available information of it yet.

The LG V30 is said to have 6 GB of RAM. As for the Asus Zenfone 3 Go, rumors suggest that it will feature 16 GB with 2 GB of RAM. Regarding if both phones will have an expandable memory option, there was no mention about it either.

The LG V30 is rumored to have a dual camera setup, both at the front and back. If this is true, it is quite interesting, because it will be the first phone to feature this kind of camera specs.

On the other hand, the Asus Zenfone 3 Go is said to have a 13 MP rear camera and a 5 MP front camera. The device is also rumored to feature a "soft LED flash" on the front design, which could offer better low light selfies.

LG is all geared up to reveal its all new LG V30 flagship smartphone at the IFA event this year.

LG has revealed that the upcoming V30 will boast an aperture of f/1.6 and will come with the 'clearest' lens ever on a smartphone.