3 Important Things You Need To Know About WhatsApp 'Status' 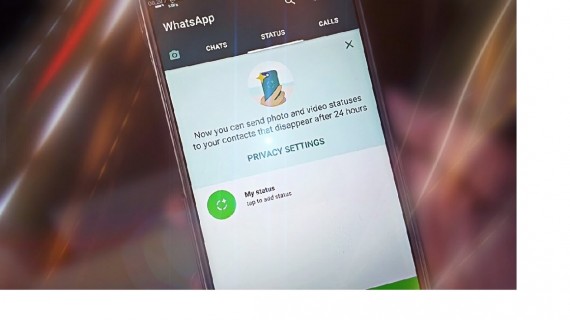 Although this feature has been criticized for cloning others, WhatsApp Status has incredible characteristics that will definitely blow users´ mind, and a particular detail that could be really controversial for many people. (Photo : GizPrime/YouTube)

WhatsApp Status is the newest feature that the social media app has rolled out, and far from being boring, is actually one of the greatest in its story. Nevertheless, one of its main characteristics is that it copied some of Instagram and Snapchat´s popular features, which clearly shows how this app wants to keep growing its users´ numbers. Given this situation, here are 3 important things you really should know about

In a time where privacy stances on social media issues seems stronger than ever, WhatsApp Status would represent a huge controversy in this particular aspect, given the fact that unlike Snapchat, this feature doesn't provide any kind of notification when someones decide to take a sreenshot of your Status.

As you might know, this is something that will definitely set a delicate situation for the app, since it´s quite possible that a lot of its users had a huge issue with this particular detail. In fact, it would actually be really disappointing for WhatsApp Status, considering that this is a feature that is expected to increase the app´s popularity, but could represent a lot of troubles for it.

Although there are many people who believe that taking screenshots won´t represent any kid of problem, because of the fact that WhatsApp Status disappears after 24 hours, no one knows if anyone saved a copy and eventually make use of it in any way. WhatsApp should take some actions in order to solve this issue.

Videos On WhatsApp Status Can Go Beyond 10 Seconds

In any kind of social media, limiting the space to express a message has always been something quite divisive, considering that some people can actually get used to it, while others don´t. In fact, this is something that blue bird platform Twitter has been dealing since it was created, given the fact that its 140-character limit remains in controversy.

However, even when this is something that could actually work sometimes, it´s quite different in videos, considering that having the opportunity to film something is extremely different to write. This way, WhatsApp Status´ feature is taking a great step into providing more possibilities to its users, since the videos can go longer than 10 seconds.

Naturally, considering that WhatsApp Status is basically a clone of some Snapchat´s popular features, it seems to pose an aggressive message the fact that it improved the 10- second ruleto 45s.  This could definitely make some Snapchat users switch to WhatsApp. As you might already know, Mark Zuckerberg is a ferocious competitor.

One of the biggest dreams of every social media user is to find a way to know who´s watching his post, but so far almost not a single platform has given you this possibility. However, WhatsApp Status offers this possibility, and far from being inefficient, it is actually much more incredible than anyone could imagine.

Believe or not, a view counter is located at the bottom of the screen while using WhatsApp Status, showing you not only how many people have watched or even looked at your states on this feature, but also their contact names. This way, your ego will be more than satisfied for knowing the exact numbers of people who viewed your posts.

If Microsoft ends up throwing the towel with the highly-anticipated Surface Phone, the company will probably say goodbye to the smartphone business for good, since it would really harm its reputation.

Of every single messaging app, WhatsApp is probably the most popular right now, thanks to a lot of features that allow users to communicate in different ways.

Google is not ready to give up on its standard messaging application and is gearing up to compete against Apple’s iMessaging feature. And in doing so, the company hopes to restart the use of text messaging.

Instead of posting a status message in a text format to your profile, the new WhatsApp feature lets users share photos and videos in a collage format for up to 24 hours before they disappear.

The International Mobile Game Award is the leading showcase for innovation, quality, and new trends in the world of mobile entertainment, putting a focus on games made for iPhone, Android, and other mobile-first platforms.