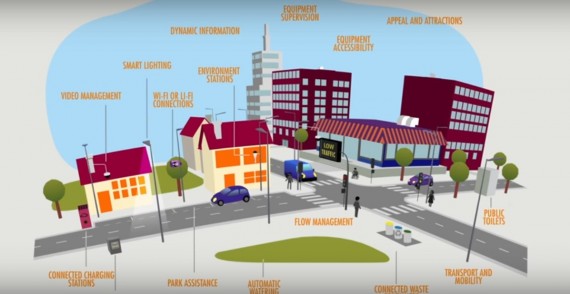 One of the central themes at the Mobile World Congress 2017 is the technology for smart cities. (Photo : VINCI Energies / YouTube)

The important themes at the Mobile World Congress (MWC) 2017 center around the small city tech. Companies such as Intel, Harman, Faststream Technologies and AT&T will show their smart products at the event.

According to Computerworld, there are thousands of vendors and around 100,000 visitors at the Mobile World Congress this year. The MWC 2017 centers so far around artificial intelligence, the internet of things and 5G wireless. All these technologies are related to smart cities.

There are some thematic exhibits that focus heavily on smart city-related tech, like the GSM Association's Innovation City. Smart city tech is also the central theme of an exhibit set up by AT&T, including a light pole equipped with sensors that can inform traffic and public safety officials about parking, road and pedestrian conditions. Sensors can also be installed to monitor the sound of gunshots, weather or air pollution.

AT&T has joined in an exclusive agreement with a division of GE called Current. The partnership focuses to deliver internet of things technology to cities in the U.S., as well as Mexico. In both countries, AT&T will be GE's exclusive reseller of intelligent sensor nodes.

The nodes are integrated almost invisibly within light poles. According to AT&T, they can work with lighting elements from various manufacturers. Multiple sensors and three cameras are equipping the light poles. Data from the nodes can be connected to a fiber optic backhaul or sent wirelessly over AT&T's 4G LTE network.

Harman announced at another booth at MWC an early detection and warning system that can monitor vibrations from mechanical infrastructure such as water pumps. The system could be used by city utilities. The Harman Quick Predict system has already been put to use in Intel's fabrication facilities and it was developed using a vibration analysis algorithm built by Intel.

Harman makes software for connected products used in industrial settings, autos and more. The company has more than 30,000 employees in its workforce. Among its brands are includes Lexicon and JBL. Machine learning algorithms are used by the Quick Predict system in order to detect when machine vibrations have reached a critical point. For instance, after an earthquake the system could assess the health of utilities that process water or machines used in factories.

According to a press release, Faststream Technologies will also hold an event at the MWC 2017. The company is a vanguard of technology solutions specializing in Big Data, IoT, Digital Transformation,product and system engineering, Security and application development. Faststream Technologies will demonstrate solutions focusing on Internet of Things, wearables, smart homes, connected cars and everyday objects to the cloud which has a impact on smart cities.

One of the important themes to be presented by the company at MWC is smart parking technology. Tech analysts forecast that about 80 percent of cars sold in U.S have rear cameras and 20 percent of car manufacturers provide WLAN hotspots. This means that IoT solutions for better connected cars would become an important focus for more companies.

A new driverless concept race car comes out of MWC 2017. The Robocar is an innovation that would be the first of its kind, and sends driverless cars one step forward.

Lenovo does it once again. The company unveils a new convertible with fair specs and affordable price.

Here is the list of devices from Samsung, LG, Sony, Huawei and HMD Global presented on the first day of the 2017 Mobile World Congress Event.