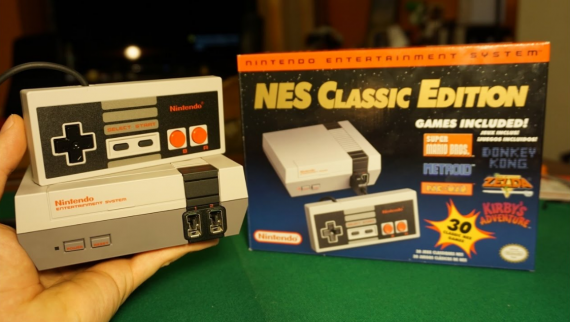 A new batch of supplies just hit Amazon and there’s plenty to go around. This is your chance to pick up an NES Classic Edition and have it shipped to your door next week. (Photo : TEC?YouTube)

This week, Nintendo is giving fans more and more chance to rely on the company and its product. Just a few days more and the Nintendo Switch will be out of the box. However, before the launch date of the Switch, another good news pop-out about Nintendo's NES Classic Edition. Today, Amazon announced that the NES Classic Edition console is still in stock and the shipping schedule will start next week.

NES Classic Edition Is Still In Stock On Amazon

According to Korea Portal, a lot of Nintendo supporters have been hunting for the NES Classic Mini Edition since last year. In fact, some of them are busy bidding at eBay and other online stores just to own this retro gaming console which is really fast moving. It is very noticeable that there are still customers who wanted to buy this system despite that it is really hard to find in the market and the Switch is already on its way.

Fortunately, the very in-demand NES Classic Edition is still in stock and available at Amazon. This good news was announced directly from the online store as of today. The customers can add the item to cart and place the order right away. Another good news is that the retro console is scheduled for delivery between March 3 and 20. Meaning, not like the other stores, you don't need to wait for at least a month just to get your order.

If you want to avail this great deal, you have to hurry because it's pretty sure that the race and rush will crash Amazon’s servers for a few moments there. According to BGR, you’ll have to pay a bit of a premium price, but the NES Classic Edition is nearly impossible to find in other online or physical stores, right now. Therefore, Amazon is pretty much the only way for you to own and get your hands on it anytime soon.

NES stands for Nintendo Entertainment System and it is also known as the Nintendo Classic Mini. It is a miniature video game console by Nintendo which launched on November 10, 2016, in Australia and Japan, November 11, 2016, in North America and Europe and November 23, 2016, in Russia. The device is such a great proposition that it's either sold out everywhere or only available through resellers for three to five times the original price. Still, most people are saying that it is worth it.

Amazon is known not just for selling quality products but also for describing it for the customers to become more motivated in buying it. The NES Classic Edition from the Nintendo Entertainment System has the original look and feel. However, the console itself is smaller, sleeker and pre-loaded with 30 games. The pre-installed games include the following: Super Mario Bros., Donkey Kong, The Legend of Zelda, PAC-MAN, Dr. Mario, Mega Man, Final Fantasy and dozens more. The Nintendo's NES Classic Mini Edition package consists of a cable of the standard HDMI, one NES Classic Controller which is grey-colored and an AC adapter. The retro console is also compatible with the Classic Controller and Classic Controller Pro and if you want to have an additional NES Classic Controllers, it will be sold separately.

Play The Nintendo Switch Before Launch In These 3 Places

Nintendo will host events for the fans to try the Switch even before its launch. One event will be an invite-only, but the subsequent two events will be open to the public.

Sony Is Making A Portable Console Similar To The Nintendo Switch

A patent that was filed by Sony in 2015 has just recently become public. The handheld console is said to take quite a few design cues from the Nintendo Switch.