Combining Lovecraftian madness, Mars exploration, and mental illness, the highly anticipated cosmic horror game, Moons of Madness will be coming soon on PC and on consoles on January 2020.

The trailer of the game is now available on PlayStation's official YouTube channel, and it starts with what seems like a normal Mars exploration, but soon evolved to flickering lights, creepy whisperings, and tentacled monsters that looked a lot like the Cthulhu.

Introduced in 2017, Moons of Madness "aims to separate real mental illness from Lovecraftian madness," resulting in a more realistic approach to exploring mental illness compared to what we usually see on video games.

Game developers from Rock Pocket worked a deal with Funcom, bringing the game into the realm of The Secret World's universe, according to VG24/7, which could explain the existence of the Lovecraft-style monster that haunts the red planet in this game.

In the game, you will take on the role of Shane Newehart, an engineer who is on a mission on Mars. He is purported to appear to be suffering from disconcerting dreams that foreshadow the imminent terror of knowing he is not alone on an alien planet, millions of miles away from Earth, as he tries to go about his duty of correcting awry things that is happening on the base. 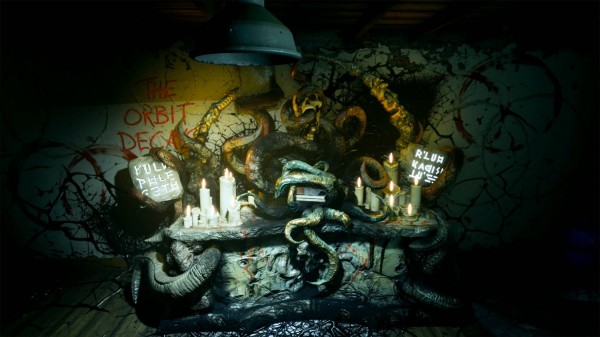 The game is a first-person, horror survival game where the gamer will have to rely on his own problem-solving skills, as well as his ability to run and hide.

According to a post by PlayStation, the game will focus more on the "ever-present sense of dread" but will include some jump scares, which is a central element among many horror games.

Besides outrunning tentacled horrors, the game also needs the gamer to explore Mars and discover its secrets.

If the trailer and the game itself doesn't scare you enough, Funcom has teamed up with Alice & Smith, industry experts for alternate reality games, to create an eerie experience before the launch of Moons of Madness on PC this October.

According to Gamasutra, the collaboration gave birth to CyranoStory.com, which utilizes Google AI and gives it control over the game based on the player's interaction.

Chief storyteller of Alice & Smith, Andrea Doyon, said that it was the "most advanced" ARG that they have made as of now, going as far as teaching the AI 298 human phobias to give every player a unique experience when they play it.

Based on what was inputted, the AI will identify every gamer's worst fear and the story and the game will evolve from there.

Gamers can interact with the ARG through words, but the AI can respond in various ways, including "creepy ghost whispers."

Although the ARG is not for those with a faint heart, the bravest ones can find themselves greatly reward with Alice & Smith and Funcom by giving away 2000 keys for various games including Moons of Madness, as well as a chance to win the grand prize: a visit at a NASA space center for two!

More details on how to win these prizes will be available on CyranoStory on October 25th.

Meanwhile, Moons of Madness will be available for PC on October 22nd and on PS4 and Xbox One on January 21, 2020.