Kojima Productions' Death Stranding is finally coming soon after years of waiting, but even when it's just a few weeks away, many are still left wondering what the story is about, and there are still so many things that we are not aware of.

Additionally, its main star--The Walking Dead actor Norman Reedus--is still teasing fans on what they can expect from the highly-anticipated game.

Specifically, Reedus talked about the Easter eggs scattered throughout the game that was based on the actor's own traits that were out-of-character and completely Norman Reedus-ish. If you're a big fan of the actor, you'll definitely know what he's talking about.

Speaking with IGN during The Walking Dead season 10 premiere, Reedus revealed that he worked with Kojima Productions, led by the legendary game developer Hideo Kojima, for three years, wearing a "little suit with the dots" that capture his movement and facial expressions.

"Every time I did something I'd scratch my head or yawn and [Kojima would say] 'Do it again,' and I was like 'Is everybody playing me?' and he goes 'No, they'll be you,'" the actor said.

Reedus continued, saying there will be a lot of crossovers between Sam Bridges and him, and that those Easter eggs were there because Kojima wanted the players to relate to the main character of the game.

"You'll see some Easter eggs or certain things that happen, and you'll go 'oh that's very Norman', but he did that on purpose."

Besides the little Reedus moments, there is also a Metal Gear Solid reference somewhere in the game.

It was shown during a 30-minute gameplay video for Death Stranding, courtesy of the Tokyo Game Show, that focuses more on Reedus' character in the game.

In the gameplay, it seemed like the player won't be directly controlling Sam, allowing you to look at him from another point of view. You'll be able to interact with him, and he'll do a bunch of actions, even pointing at certain areas and encourage you to go there. 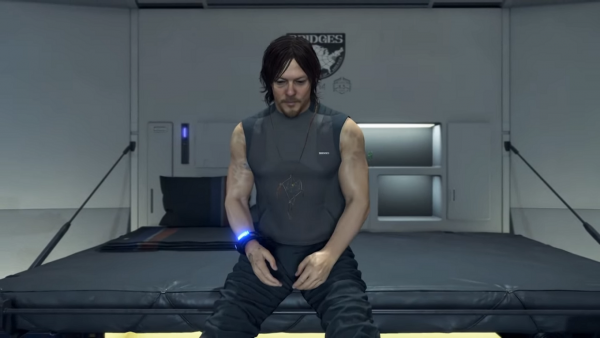 However, something happens if you keep on staring and zooming the camera at his groin. At first, he would be bashful and would cover his privates, but continue doing so, and he will close his legs, get up, and hit the camera.

According to Eurogamer, this seemed like a nod to a Metal Gear Solid scene that will be triggered if you stared at Meryl.

Meanwhile, more details are coming out before the game finally launches, such as the reasonably hefty install size of the game, as well as the entirely optional multiplayer mode.

Fans can also expect more details coming out as reviews for Death Stranding can be officially revealed as the review embargo will be lifted on November 1, allowing those who have and are playing the game beforehand to review and release statements on what they think about the game, including some possible spoilers.

It's a full week before the game finally releases on November 8, but as of now, that seems to be the extent of what Sony has allowed people to say.