All-New Smite Character Baba Yaga: Witch Skills Should You Use? 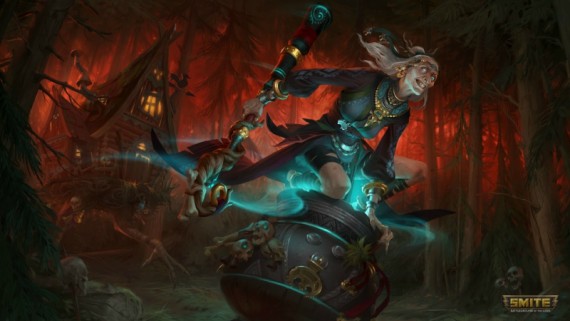 A brand-new god has entered the playing field in the massive third-person multiplayer online battle arena (MOBA) Smite. The ned addition marks the 109th release for the MOBA. The wicked witch is a highly-requested character by the community, and fans have finally gotten their hopes.

Baba Yaga is designed with unique eerie and distinct aesthetics and abilities. The character's lore is based upon the witch of the forest, making her mysterious and evil with an unpredictable stature and powerful magic.

Her in-game companion is a hut that has the legs of a chicken that movies by itself. In contrast, her ultimate ability has her enter the hut and take control of it to deliver powerful destructive skills.

She also holds a pestle she utilizes as a magic wand, and her mortar is a means of travel and escape. Both tools can be used together to mix volatile mixtures and store them to be used as consumables.

Baba Yaga was created as a result of wishes from the community, and her announcement has brought the delight to many fans.

The witch inhabits the deep forest in the historical lands of the Slavic pantheon. Every single child trembles at the very mention of her name 'Baba Yaga.' She is the original character in the witch of the forest folklore which inspired many others to take on the myth.

Even with Baba Yaga's seclusion and solidarity, there are still those who dare to seek her out and ask for assistance. She is more unpredictable than she is dangerous, and she may lend her aid with no malice sometimes. She is notorious for being confounding, maybe even for herself.

Read Also: Composer For Doom Eternal, Mick Gordon, Reportedly Didn't Hae A Hand In The Final Works Of The Game And Might Be Leaving Because Of It

Inside the game, the witch stays true to her identity and lore with her design. Exuding malicious and unruly magic, Baba Yaga has everything at her disposal to deliver robust and potent strikes.

Your trusty companion stands out--literally--as being a chicken-legged sentient hut. It provides the witch with healing properties and battle assistance.

Smite is a free-to-play third-person multiplayer online battle arena similar to games like Defense of the Ancients (DOTA) and League of Legends (LoL), except it brings you closer to the action with a new camera view that sits near the top of your character.

The game was developed and published by Hi-Rez Studios. It is available and can be played on PC, PlayStation 4, Nintendo Switch, and Xbox One.

Take control of one of many Gods/Goddesses or mythological creature/being in the roster and coordinate with your team to take down the opposing players.

The game also has a vast global community and officially-held tournaments such as the annual Smite World Championship.

Whichever holy (or unholy) being you choose to side with, you'd have plenty of options to choose from with the plethora of characters available.

Cthulhu in Smite: Why Players Think He's Not a Good Fit

Hi-Rez Studios brings in a new patch for its free-to-play MOBA Smite. The patch highlights the new Racer Rumble game mode and more.