Tech Reporter Advises Against the Use of Nightmare Robot Dog to Help Frontliners: Suggests there are Other Existing Alternatives 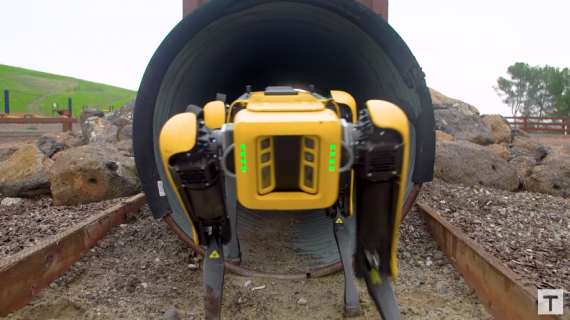 Tech Reporter Advises Against the Use of Nightmare Robot Dog to Help Frontliners: Suggests there are Other Existing Alternatives (Photo : Screenshot From Adam Savage’s Tested Official YouTube Channel)

According to an article by Gizmodo, telemedicine could actually be the key to help keeping frontline healthcare workers safe but the article did not state its fondness of the nightmare robot dog. Plenty of robots have already been deployed to help hospitals by remotely monitoring patients, making deliveries, disinfecting surfaces, and even bringing food to certain quarantined people.

Right now, Boston Dynamics is trying to jump on the bandwagon with its very own nightmare robot dog named Spot. Could this robot dog be useful or is it just too frightening?

The firm that was best known for its somewhat frightening bots have just announced that it will be working with Brigham as well as Women's Hospital back in Boston in order to see if the robot Spot can actually help reduce the risk of healthcare workers' exposure to the virus.

Is the nightmare robot dog Spot really that useful?

Although this could sound like a huge progress, it is only a way of saying that you could stick an iPad along with a two-way radio on the nightmare dog and although it is not that bad, it does not seem to do more than that.

Currently, Spot is being put to use by doctors who are remotely videoconferencing their potential COVID-19 patients inside the tents for initial assessment. However, Boston Dynamics themselves have admitted that there's not much Spot can do aside from that.

This robot was originally built for police and military utilization but in order to be useful to hospitals, the nightmare robot dog should be able to at least measure body temperature, pulse rates, respiratory rates, and also oxygen saturation.

The company is still looking at different ways that bots can disinfect certain surfaces with a UV-C light. Although this may sound like a good idea, there are actually existing robots out there that could already complete this task.

Currently, a robotic nurse called Tommy is being used in six different hospitals in the Lombardy region in Italy, which is known for being the outbreak's epicenter. The bot looks much friendlier and already has built in tablets, microphones, and also monitors. The bot is already able to measure both blood pressure and oxygen saturation for certain ICU patients, even those on ventilators.

China has already deployed certain UVD Robots from Denmark to help disinfect patient rooms. The robots have already been in the works for a total of four years before they were first being sold in 2018. Not only are they useful, they can also disinfect a room within just 10-15 minutes and were specifically designed for hospitals. These bots are also used to deliver food to those in separate isolation wards.

Currently, there is already a great deal of medical, teleconferencing, and disinfectant robots all around the world that have already gone through thorough testing and development and do not need to be modified in order to be of proper use during this pandemic.

By only watching YouTube Tutorials, Easton LaChapelle turned his passion for robotics into something that will help change amputees' lives for the better.

A Belgian company has been using a pipeline to carry 1,500 gallons of beer to its bottling facility two miles away! How else can autonomous technology increase efficiency?

Far Cry 6 is on the horizon, and it's safe to say that everyone is hyped over Ubisoft's upcoming triple-A release.