Watch! Two Russian Air Force Fighters Spotted Flying Over a US Destroyer were Intercepted by a Belgian F-16 Fighter Jet 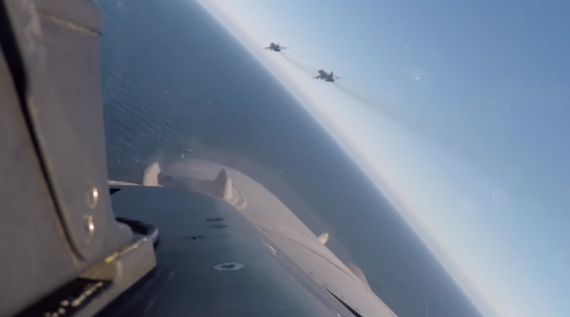 A certain Belgian F-16 fighter jet that was patrolling the Baltic region during Friday morning has just intercepted two different Russian Air Force fighter jets that were all flying over the US destroyer located off of the Lithuanian coast.

A certain video was released by no other than NATO's Allied Air Command that was able to capture the Russian jets "maneuvering in international airspace" that was located over the USS Donald Cook, which is a United States destroyer that was deployed to the Baltic Sea ever since last April 11.

According to the air command's brief statement, the seen Belgian F-16 had been conducting a professional intercept and also left the scene, demonstrating that NATO still remains ready, vigilant, and also prepared to respond to any other potential threats.

The USS Donald Cook has been deployed to the specific region with a certain focus on the regional stability as well as honing certain anti-submarine warfare capabilities located in the Atlantic, according to NATO. In addition to the USS Donald Cook itself, the USS porter has also been deployed back in April 13 for a sort of joint-exercise with the known Regina Maria, which is a Romanian frigate.

According to Oana Lungescu who is a NATO spokesperson in his statement last April 17, these specific deployments actually show that NATO allies are all working closely with one another in order to ensure that the potential adversaries all do not exploit the situation to even further their interests.

NATO on the move

The members of NATO routinely rotate their own patrols located in the Baltic airspace. The United States military has also made note of the very recent provocations that were made by these Russian fighter jets.

Back in April 8, the United States F-22 fighters had previously intercepted two different Russian IL-38, a specific maritime patrolling aircraft, which was seen entering the Bering Sea itself in the Alaskan Air Defense Identification Zone.

About a week later, an identified Russian Su-35 jet was seen buzzing a United States Navy P-8A Poseidon, which is an anti-submarine as well as anti-surface warfare aircraft, which was flying over the Mediterranean Sea. These Russian jets then flew an "inverted maneuver" just about 25 feet in front of the United States aircraft, these reports were given by the United States Naval Forces Europe-Africa.

The crew aboard the P-8A

The crew aboard the P-8A Poseidon had experienced some sort of "wake turbulence" during this specific encounter that even lasted 42 minutes long according to the Navy. On Sunday, there was another Su-35 fighter jet that had intercepted the United States Navy P-8A Poseidon that was positioned over the Mediterranean Sea in a quite similar fashion.

Belgian jets have been able to intercept Russian aircrafts in the past. Back in 2019, some Belgian F-16s were suddenly scrambled to intercept two different Russian Tu-160 bombers that were actually accompanied by two different Sukhoi Su-27 located over the Baltic Sea.

Moon Uncovered: See The Updated Map Of Luna That Scientists Have Collated

The team, led by the United States Geological Survey's Corey Fortezzo, built the map using six old Apollo maps and some more updated satellite data. See the Moon and its geology with a whole new look!

The Asus ZenFone 4 max was recently unveiled in Russia and it impressed with its dual cameras and mammoth 5,000mAh battery.

Google Agrees To Open Apps On Android-based Devices in Russia

Google has promised to Russia's Federal Antimonopoly Service that the company will allow rivals' search engines and apps to be pre-installed on smartphones running its versions of Android in Russia.

The Russian Terminator robot is shown to be able to shoot guns with both hands. It can also drive a car and do press-ups, making people nervous despite Putin's assurance that the violent exercises are just part of the machine's decision making and coordination training.