When astronauts first came to the Moon, it was a brief moment as they didn't have the necessary tools, equipment, or resources to survive an extended stay on our little Moon. With NASA's new Artemis Mission that's set to begin in 2024, however, the space agency is preparing itself and its space personnel well for a fight of endurance against the Lunar surface.

Astronauts will be sent on a mission to the Moon, where they will stay for a much longer duration as well as maintain a sustainable presence. For this journey, NASA is set to equip them with briefcase-sized lunar flashlights that will be used to located icy water deposits that are hidden in the Moon's surface.

A shining beacon of hope

The device is design similar to a CubeSat, which is a small satellite the size of a standard briefcase. The flashlight will shine its light on the Moon's dark craters that are widely spread.

The craters have previously been investigated and revealed to show signs of water, which is a precious resource when you're stranded in space with no easily accessible source. In 2018, NASA was able to locate ancient ice deposits in the dark craters at the northern and southern poles of the Moon.

Water isn't only used for drinking and hygiene, and it's also used as an ingredient in the production of their spacecraft's propellant fuel.

The device can find water due to its capability of detecting surface ice located at the bottom-most parts of the craters of the Moon. It does so by scanning the South Pole over two months, occasionally diving in at low altitudes to shine light at the craters in search of ice.

Lunar Flashlight project manager at NASA's Jet Propulsion Laboratory John Baker stated the proposed mission project costs much lower to accomplish and fills a specific role in helping us understand more of our closest cosmic body. It can also aid us in preparing for future missions that require significantly longer stays, added Baker.

The device uses a four-laser reflectometer and water-absorbed near-infrared wavelengths to figure out exactly where ice is hidden within the craters. The way it works is, rocks deflect the light back towards the device. In contrast, water absorbs the light, negating any return light to return. This is how the lunar flashlight determines if there is water or not. 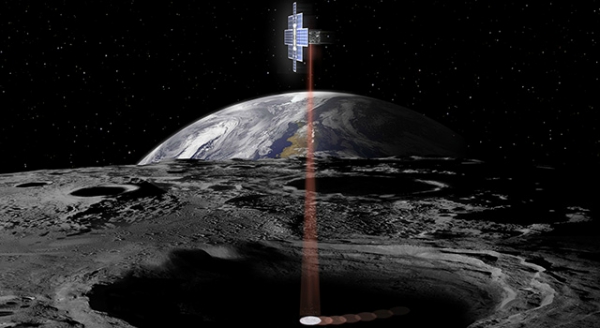 The amount of light absorbed also determines the amount of ice that could be on the surface.

The project would fulfill two purposes; one is giving astronauts the necessary resource they need to survive a lengthened stay on the Moon, and two is providing scientists with valuable research data about the amount of ice present on the Moon's surface.

Principal investigator of the project at NASA's Goddard Space Flight Center in Greenbelt, Maryland, Barbara Cohen, stated they would also be able to compare the data from the lunar flashlight with the ones they already have of the Moon from other missions to see if there are any similarities in the data about ice presence.

The project is set to launch sometime in 2021. It will utilize Artemis I, which will not house any astronauts, but rather spearhead the mission and conduct a test flight of the Orion spacecraft, which will eventually bring astronauts to the Moon.