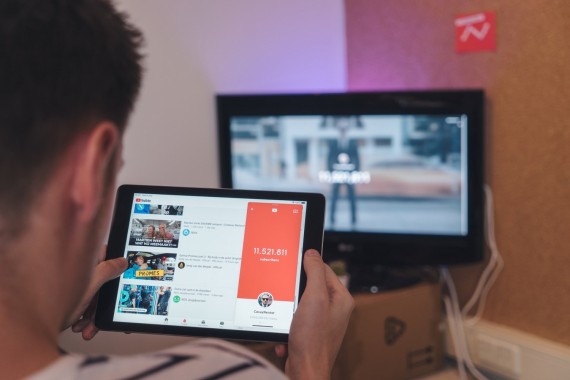 TCL's newest affordable tablets take cue from what the company has been known for so far. Almost a decade ago, having high-definition TVs was possible but pricey. Sony and Samsung had their own models that used to cost an arm and a leg. TCL, along with other new players in the market, pave the way for affordable displays that can be at par with more established brands.

The Huizhou-based electronics company previously announced that it will also be making its own line of Android phones. This time, TCL plans to enter the tablet computer market with its TCL 10 TABMAX and TABMID. Honestly, the model names aren't that intriguing or exciting but right away, we already have an idea which one is the bigger brother.

The TABMAX has a 10.36-inch IPS LCD display. It uses TCL's NXTVISION image processing technology that attempts to turn up detail and saturation up a notch. Looks like TCL is also concerned about its users' health as the TABMAX has intelligent eye protection. It includes blue light reduction and visual notifications once the sensors detect that the user's face is too close to the screen.

The TABMAX also has a MediaTek MT8768T octa-core chipset. It runs with 4GB of RAM and 64GB of storage. We're not sure yet if it has expandable storage but it does have a huge 8,000mAh battery. If you're willing to spend some more, you can opt for the LTE-variant.

There's a 13-megapixel camera at the back that supports 1080 video recording. The TABMAX has an 8-megapixel front-facing camera too. Its dual speakers support far-field noise cancellation.

At €249 (or €299 for the LTE variant), the TCL TABMAX packs good specs for its price. If you want further productivity on-the-go, you can purchase add-ons such as a low-latency stylus and a keyboard case. It might not be a direct match to more expensive tablets like the iPad Pro but it can certainly do the job.

It won't be "TCL's newest affordable tablets" if we only focus on just one, now would it? At €229, the TCL 10 TABMID has an 8-inch IPS display with a 1200 x 1290 resolution. It has the same NXTVISION tricks its big brother has though the bezels around the screen are quite larger.

Instead of using another MediaTek chipset, the TABMID comes with a Qualcomm Snapdragon 665 processor. It also has 4GB or RAM and a smaller 5,500mAh battery. There's an 8-megapixel sensor at the back while the front of the tablet houses a 5-megapixel camera. And if you're a fan of anything that's blue, you'll love this tablet since it only comes in that color.

TCL's newest affordable tablets are set to be available during the last quarter of this year. There's no plan yet to make either the TABMAX or the TABMID available Stateside but if something comes up, we'll let you know right away.

Blackberry KEYone Sold Out Online In Many Countries

TCL president Steve Cistulli admitted that a lot of its customers are facing a lot of issues regarding stocks. However, he also added that they are now working closely with its retail partners to ensure additional stock of the KEYone.

Blackberry KEYone: A Smartphone With Modern OS But Vintage Keyboard

The BlackBerry KeyOne isn't water resistant like the latest phones from Apple and Samsung. That means it's more prone to damage if you accidentally spill water on it or get caught in a downpour waiting for a cab.