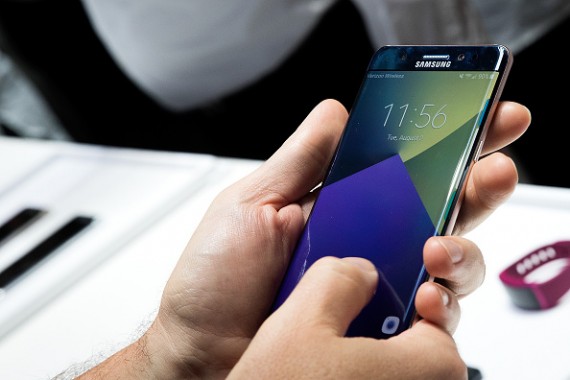 Samsung Galaxy Note 7 owners have been tired of the recall issue and it seems like they are ready to just move on with Google Pixel Phones. (Photo : Andrew Angered/Getty Images)

Samsung Galaxy Note 7 units were turned off the moment news broke out that a ton of units were recalled after literally blowing up. Seems like they are ready to move on and go for Google Pixel phones.

While there were rumors that the Google Nexus phones are going to be the fastest Android smartphones to be released, the truth is the Nexus line is dead. Google decided to discontinue and drop the Nexus in exchange for the Pixel brand. Now, instead of calling it Google Nexus, users should probably refer to it as the Google Pixel now.

Sources suggest that the Google Pixel and Pixel XL phone will be released on October 4. When these phones were still in the making, Google gave each smartphone colorful code names and called Pixel the "Sailfish" and the Pixel XL as the "Marlin". If Google didn't drop and rename Nexus to Pixel, the Google Pixel Phone was supposed to be called the Nexus 5X while the Pixel XL should have been the Nexus 6P.

Google is trying to do and approach things differently this time. While tech experts assume that Google just dropped Nexus to rebrand its devices with the Pixel moniker, the reality is Google is coming up with a different product that offers more high-end technology compared to the Nexus line, according to Android Headlines.

Right now, Apple and Samsung are the biggest names in the game of smartphone production. Every year, they always come up with smartphones offering the best features that would just make every consumer feel torn, which is the better option?

While big companies provide confusion, Google may have come up with a solution. Google Pixel phones aren't trying to overshadow any smartphone nor are they showcasing a particular operating system. Google only aims to become the premium alternative if choosing between other brands prove to be more difficult than it should be.

Yes, Apple, Samsung, HTC and other brands have already established their names by inventing high-end smartphones to make every consumer's life easier, but Google does not just aim for that and they assure everyone that they are in for a surprise as Google Pixel aims to bring an interesting package once the Pixel and Pixel XL have been launched and released.

iPhone 7 Jet Black has enticed every Apple fan and it got some Android users to switch. Unfortunately, their excitement wanes down after reaching the end of the long line outside the Apple store.

Two of the most anticipated laptops this year, the MacBook Pro 2016 and the Surface Book 2, are expected to go head to head with each other as soon as they get released.

The Motorola Nexus 6 and HTC Nexus 9 are next in line for Android Nougat.