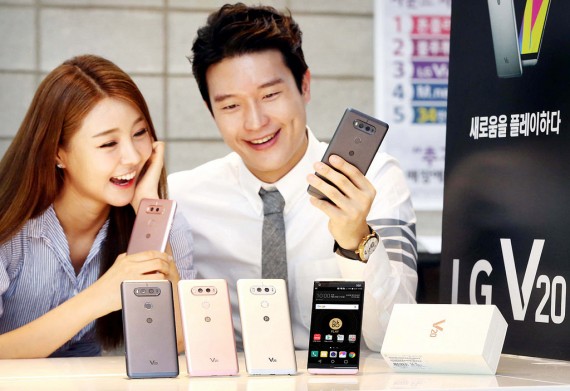 With the LG V20, consumers have another option for a replacement to their ill-fated Samsung Galaxy Note 7s. (Photo : Photo by LG전자/Flickr)

Now that Samsung pulled out the plug for the production of the Galaxy Note 7, other handsets are given the chance to rise up and beat the market that the Note 7 once dominated. For Note 7 owners, finding the best phablet to replace their Note 7 is quite a challenge. Today, we will try to look into two possible options, the LG V20 and the Google Pixel XL. We will try to see which of these handsets would win the title as the best Note 7 replacement.

Last time, we decided that the Google Pixel XL is the best replacement for the Note 7. But right now, the Pixel XL has found a new rival in the form of the new LG V20. Both devices are at par with each other when it comes to quality build and latest specs. The V20 uses glass and aircraft-grade aluminum for its body that gives its a premium feel, much like the Pixel XL that takes after the premium feel of the iPhone 7. Both devices are equipped with the latest processors. Both sports impressive cameras. Both have crisp images rendered thanks to QHD displays. All in all, both handsets seem very much the same as the other. So which one will win?

With an aluminum body, the LG V20 feels more premium to the touch and is much lighter compared to its predecessors that have stainless steel for its body. LG's flagship is larger but is much thinner than the Pixel. On the other hand, Pixel XL wins as the much lighter handset. It also looks like Google's version of an iPhone 7.

If bigger is better, then the LG V20 would win over the Google Pixel XL with its larger display. The V20 is just a little bigger with a 5.7-inch display compared to Pixel XL's 5.5-inch. Both are equipped with QHD resolutions but with different technologies. For LG, they have a primary display using the IPS Quantum QHD with a resolution of 2,560x1,440 pixels. This puts the LG V20 much brighter when turned on. For the secondary display, LG used a lower resolution at 1,040x160 pixels.

For the Pixel XL, Google used the bright and crisp AMOLED display to provide a QHD resolution of 2,560x1,1440 pixels.

Camera power and performance is one of the best competing points of the LG V20 and Google Pixel XL. DxOMark dubbed the Pixel XL's camera the "best smartphone camera" to ever grace the market yet and even beat the iPhone 7 with a rating of 89 over the latter's rating of 86.

The Pixel XL gained the highest DxOMark rating so far with its 12.3MP camera. But the LG V20 might beat that with a 16MP sensor. Pixel XL's shots are sharper and detailed, but judging the higher and better sensor of the V20 - especially with the addition of the wide-angle lens with an 8-megapixel sensor - we can assume that using this phone to take shots would provide photos which are more scenic and more detailed.

However, there's more to the Pixel XL's camera than meets the eye. The Pixel might have a smaller sensor but it benefits from an HDR+ feature, meaning there should be no shatter lag. With a dual-LED flash, Pixel's camera also works well even in low light. Google also focused on the video capability of Pixel. Aside from HD video, users can use the Pixel to capture 4K videos with 1080p resolution at a quick rate of 30fps so recording moving objects is no problem.

Both flagships from Google and LG uses the latest Snapdragon 820 processor. But the Pixel XL is much faster with a 10 percent up on speed thanks to the newer 821 chipset model that Google used. Both handsets use the Adreno 530 GPU for crisp graphics and packs a 4GB DDR4 RAM for fast processing. The only advantage that the LG V20 has is that it has several variants - 32GB and 64GB - with expandable memory via SD card. The Google Pixel XL also has those and offers as much as a 128GB model sans the expansion. This may not sit well with those who plan to use their phones to record 4K videos, which would eat a lot of memory space.

The LG V20 comes with a removable 3200mAh battery that is said to last throughout the day. The Google Pixel XL has a larger battery with 3450mAh power but is non-removable. Both handsets are enabled with the Quick Charge 3.0 for fast charging.

The LG V20 costs around $800 and is available in variants of Pink, Silver, and Titan. On the other hand, the Google Pixel XL costs $770 for the 32GB model and it's available here.

Just like any other modern flagships, the LG V20 and Google Pixel XL are both dressed up with standard features notable of modern flagships. These include WiFi connectivity, GPS, Bluetooth V4.3 and Type-C reversible port for data transfer and charging. Both handsets can be unlocked using a fingerprint sensor and runs on the latest Android 7.0 Nougat.

Choosing which phablet is the winner between the LG V20 and the Google Pixel XL is a tough battle. Both devices are excellent and obviously cater the high-end of the Android market. Each phone is noteworthy to be called a flagship from their respective makers. But casting the price aside, the Google Pixel XL still has more merits than the LG V20.

One, the Pixel XL has the latest Snapdragon 821 processor which is 10 percent faster than the LG V20's chipset even if it has almost the same model with the same clockspeed. The Pixel's camera is also proven as the best in the market so far and for those who want a phone with impressive photography capabilities, then Google's flagship definitely fits the bill. The AMOLED display is also a plus point as well as the larger battery with a 3450mAh capacity which will last users longer through the day compared to the LG V20's power.

Galaxy Note 7 Refund: How To Get Your Money Back

After permanently halting the production of the Galaxy Note 7, Samsung and retailers are now rolling out policies on how consumers can refund their money and exchange their handsets.

Google Pixel may be a new flagship to hit the market and it has definitely gotten a lot of attention. But how will it compare to Asus new flagship that comes with the same Snapdragon 821 processor, the Asus Deluxe Special Edition ZenFone 3?