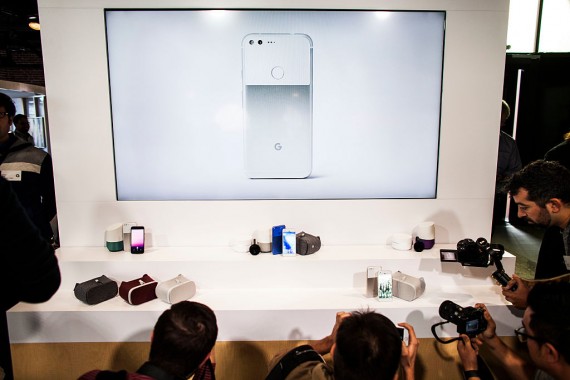 Members of the media photograph a display of Google's Pixel phone and other products during an event to introduce Google hardware products on October 4, 2016 in San Francisco, California. Google unveils new products including the Google Pixel Phone making a jump into the mobile device market. (Photo : Ramin Talaie/Getty Images)

The Nexus series introduced the best smart phones in 2015, notably the Nexus 5x. With the launch of Pixel Smartphone, Google is taking another leap forward under a different banner. Will Nexus 5x stand up to the new Pixel phone? Does the increase in specs justify the dramatic increase in price?

These questions, we hope to answer in this comparison.

When it comes to hardware specs, Google Pixel is clearly ahead Nexus 5X. Pixel is using Qualcomm 821 quad processor and packs 4GB of DDR Ram and 32 GB or 128 GB of non-expandable UFS memory. It uses 2,660 mAh non-removable battery for power and charges really fast. 5X on the other hand carries a mid-range Qualcomm Snapdragon 808 hexacore processor with only a 2GB RAM and an internal memory of 16GB or 32 GB.

Since Pixel is known for its premium camera features, it is clear that in this area, Google Pixel is a notch ahead. It has a 12.3 MP sensor along with an f/2.0 aperture and 8MP front camera. With these specs, Pixel camera was tested by DxOMark and received a score of 89, the highest yet for a smartphone. Nexus 5X camera uses a 12.3 MP Sony IMX377 for the rear camera and 5MP lens for the front camera.

Nexus 5X vs. Pixel: Other Specs

Nexus comes in an Android Nougat 7.0 update and has a large facing speaker that can put out awesome sounds for a small unit. It carries a 2,700 mAh non-removable battery and has a fingerprint sensor allowing the user to authorize purchases with the fingerprint. Nexus 5X is priced at $349 for the 16GB model and $399 for the 32GB variant.

Similar to the earlier Google model, Pixel also has an Android sensor that allows users to unlock the device and authorize mobile payments. The smartohone is IP53 rated, meaning it is splash and dust resistant. The device will be running Android Nougat 7.1 and it costs around $650.

There are three features that the Nexus 5X model doesn't have such as the Google assistant, an unlimited Back up for photos and the Pixel launcher.

Based on the given specs and capabilities, it is clear that the $250 difference in price is worth it for the wide array of updates in specs and features. Google Pixel is expectedly the better phone with it being the latest, but Nexus 5X can still hold its own. It is still a great phone for individuals with lower budget.

The LG V20 is another solid phablet to replace the Samsung Note 7. But between the Google Pixel XL and LG's flagship, which one would win?

Android Nougat 7.1 October Release: Which Phones Will Get It First?

The new Android Nougat 7.1 beta update will come with a support for Google Daydream VR.

Galaxy Note 7 Alternatives: 4 Devices You Should Get Instead

Here are some other great Android phones you should check out.