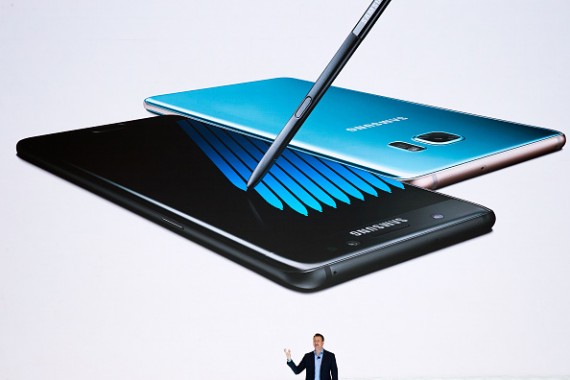 With Samsung’s Galaxy Note 7 officially out the smartphone market forever, there are a lot of shoes to fill. Fortunately, the Android market is full of worthy alternatives. (Photo : Drew Angerer/Getty Images)

When news first broke out that Samsung's Galaxy Note 7 units were exploding through no fault of the user, the Korean tech giant issued an official recall of the device. So fans of the company waited until the unit would be safe. But with the recent announcement that Samsung will be recalling the device for good, a gap now exists which other Android units must fill.

Fortunately for most consumers, there is no shortage of great Android devices. While the Galaxy Note 7 may not be completely replaced in the hearts of many, there are ample alternatives that are available. Some of these share the specs and features of the Samsung device, while others have different offerings.

According to Tech Crunch, a number of consumers are expected to jump ship and go with a completely different brand. As Google's Pixel XL unit is new to the market, they definitely caught the eye of many. The publication claims that the devices' entrance to the smartphone market has even made iPhone enthusiasts reconsider.

The Pixel XL has a 5.5-inch display and boasts of the best camera in the smartphone industry, which is 12 megapixels at the rear and 8 megapixels in front. A Qualcomm Snapdragon 821 processor powers the device and it runs smoothly on 4GB of RAM. It is available with 32GB of internal memory and 128GB of internal memory, with the smaller variant priced at US$769.

The LG V20 is powered by the Qualcomm Snapdragon 820 processor and runs on 6GB of RAM, as noted by Android Community. As these are the same specs that were present in the Galaxy Note 7, performance will pretty much be paralleled. Unlike the Samsung option, however, the device runs on Android 7.0 Nougat right out of the box.

With a Super AMOLED 5.7 inch screen, the LG V20 also comes with a 16-megapixel rear camera and a 5-megapixel front camera. Unfortunately, actual usage is untested, as the device has not been made available just yet. It will, however, undoubtedly run with as much power as, if not more that, the Galaxy Note 7.

Samsung Note 5 And S7 Edge: Keeping It In The Family

For the Samsung loyalists, there is the Note 5, which is arguably as close to the Galaxy Note 7 as one can have. What truly set the Note 7 apart is the S Pen, which is also a feature of the Galaxy Note 5. It should also be noted that the Note 5 is the direct predecessor of the Note 7, as Samsung opted to "skip" its 6th generation.

The Galaxy Note 7 is powered by the Exynos 7420 octa-core chipset, which packs a punch, though it is definitely not as powerful as the processor that would have been on the Note 7. It has a Super AMOLED 5.7 inch screen and runs on Android 5.1 Lollipop out of the box, but is upgradable to Android 6.0 Marshmallow. It runs on 4GB of RAM and has a 16 megapixel and 5 megapixel rear and front camera.

Of course, there is no doubt that Samsung's Galaxy S7 Edge is the best that the tech giant can currently offer. It runs on the Qualcomm Snapdragon 820 processor and 4GB of RAM. It has a 5.5 inch Super AMOLEd capacitive touchscreen and runs on Android 6.0 Marshmallow straight from the box. It also has a 12-megapixel rear camera and a 5-megapixel front camera.

2016 MacBook Pro Specs And Features: The Necessary And The Theatric

Because Apple has not released an official statement for the 2016 MacBook Pro, only rumors of the unit are making headlines, some of which would be ideal for the upcoming device, while others are better as stage smoke.

iPhone 7 Plus vs. Samsung Galaxy S7 Edge: Which Unit Rules The Smartphone Industry

It’s a battle between the best Android has to offer and the best of iOS. The Galaxy S7 Edge and the iPhone 7 Plus are arguably the epitome of both platforms.

The upcoming LG V30 is said to come with powerful specs, new thrilling features, could one of the first smartphones to run Android O.