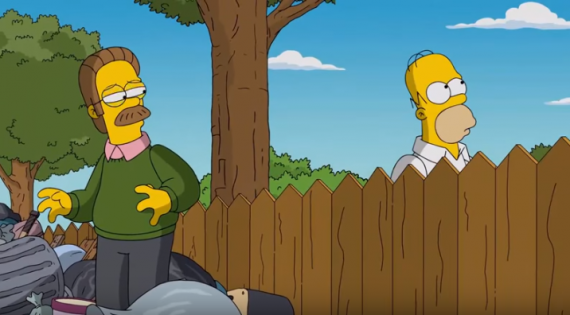 There's a reason why The Simpsons is still here and the biggest one is Homer Simpson. (Photo : funnyvideos / youtube)

The Simpsons is the longest running TV series in history. For almost two decades, Springfield's chaotic family ruled the television and there's no stopping them.

Led by the greatest comic creation of all time and also the greatest character of the last 20 years, Homer Simpson. Homer J. Simpson is a simple man with a simple life. All he wants is to eat donuts, drink beer and make love to her wife, Marge. Marge on the other hand is the over protective but fun loving mother of Bart, Lisa and Maggie.

The Simpson family embarks their everyday life with their normal day to day activities. Homer, who works at a Nuclear power plant who owns by Mr. Burns is like any other employer. He wakes up in the morning, eats his breakfast, go to work, then drink with his friends after.

The family has a unique relationship to each other specially the father and son duo. Homer has the habit of choking Bart if he made mistakes that pisses Homer off. On the other hand, Bart will do anything possible just to ruin Homer's day. Lisa is the complete opposite of Bart, while Bart is considered as the headache, Lisa is considered as the antidote. Together, they form a pact and rivalry that only a true brother and sister have.

The Simpsons is already on its 27th season but let me tell you some facts that you still don't know about the legendary TV series. So let's go ahead and check them out.

1.The word "d'oh" commonly used by Homer Simpson was added to the Oxford English Dictionary in 2001 The word's defined as: "Expressing frustration at the realization that things have turned out badly or not as planned, or that one has just said or done something foolish

2. Bart Simpson's name is an anagram of BRAT. His full name is Bartholomew Jojo Simpson.

3. All characters on The Simpson's have just 4 fingers on each hand,except for one with five: God.

5. In the opening scene, Maggie used to ring up on the cash register as $847.63 because in 1989, that was the estimated price of raising a baby for one month.

6. Whenever Bart prank calls Moe's Tavern, he dials the number 764-84377 (which is one digit longer than an American phone number need be). It spells out "SMITHERS".

8. The Simpson's couch gag is actually a trick used by the writers to make the show longer or shorter.

10. As you likely already know, most opening credits feature a unique message written on the school blackboard by Bart. A few previous messages have included: "I was not touched ‘there' by an angel", "Pork is not a verb" and "I will not whittle hall passes out of soap"

Lastly, The Simpsons proved that it needs a lot of chemistry and versatility to survive a TV series. Their creativity is off the charts and already produced successful writers such as Conan O'Brien. Let us watch some of the funniest scenes from The Simpsons.

‘The Simpsons’ News and Updates: Producer Thought That The Show Was Cancelled?

The producer of the TV series “The Simpsons” Thought that the show will be canceled. Actually, there were two times it became possible, and one of them just happened recently.

Jimmy Kimmel visits Homer Simpsons and goes on a tour around Springfield to commemorate the animated sitcom's 600th episode.

‘The Simpsons’: Fan Favorite Character Frank Grimes To Be Resurrected

Frank Grimes, the Homer-obsessed character that was killed in season 8 will return from the dead 20 years later.

'The Simpsons' Writer Mike Reiss Reveals Japanese Audience Not Much Of A Fan; Show Not Entirely Political

"The Simpsons" not getting much love from Japanese audience unlike the rest of the world. Mike Reiss, show writer and producer feels strong affinity for political satire now more than ever.

Since the release of Nintendo Switch is coming near, the games that will be compatible might have been revealed by a cartoon series.