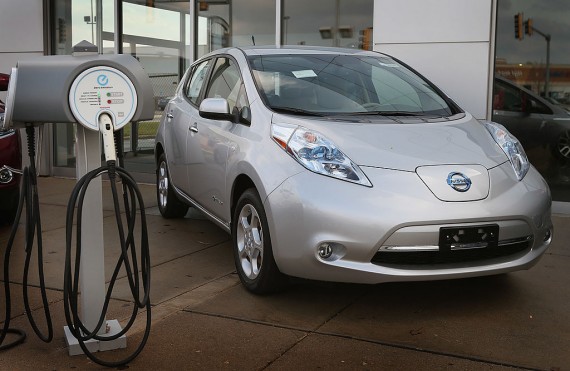 New electric cars are being sold in the market, which leaves consumers on what to buy. What features should consumers expect when choosing their EV. (Photo : Photo by Scott Olson/Getty Images))

Nissan Leaf and the Tesla Model 3 have already both been released. And, as more consumers look into using an electric car as their daily driver, they ask questions on which model would suit them best.

Although electric vehicles have been on the streets for a while now, new consumers are still wondering on what to expect with these cars. People have been asking about the reliability and if the car is really road worthy. In short, is it worth it?

Tesla has been manufacturing electric cars for more than a decade, and is now on its Model 3. On the other hand, Nissan Motors is only on its first electric vehicle, the Nissan Leaf. The latter may be late when it comes to electric car manufacturing, but it has been on the car industry since 1934, while Tesla Motors was only founded in 2003.

The Nissan Leaf can take you up to 124 miles on a single charge while the Model 3 can bring you to at least 215 miles. The Tesla may seem like a winner in this regard, however, it is best to know if you would be taking the car for long trips or for just a few miles per day.

The Model 3, by far, is smaller than the previous Tesla Model S but will have a flexible interior space. The rear seats can be folded down to open up 66 inches of room. The Leaf, however, is the only electric vehicle in the market today that offers more back seats.

330 liters of luggage room is readily available, and can be increased to 680-liters by just pushing forward the rear backrest. In addition, the rear seats can accommodate up to 3 adults.

Both cars have aerodynamic designs that decrease drag, which in turn, prolong battery charges to last more. The Leaf is designed like a hatchback, while the Model 3 looks similar to its older sedans. Both are fitted with alloy wheels.

Although the Tesla is already on their third electric car, both companies are still new to electric car manufacturing. Both are still working day and night in research and development to improve their electric cars. They are both geared to safety, and are both environment-friendly, thus, the use of charged batteries instead of the traditional petrol.

It is highly advisable to conduct your own research too, before purchasing an electric vehicle. Learn your driving style and determine if your will be using the car as a daily driver or something that you will drive on the country back roads. Whether you choose the Tesla Model 3 or the Nissan Leaf, you will surely enjoy having one of the firsts to have and drive an electric car.

As newer and newer technologies are being developed every day, Corning provides its share in making the automotive industry safer and more user-friendly with the Gorilla Glass.

The Audi makes driving more fun as they introduce a convertible version for the new Audi R8 5.2liter V10.