2016 MacBook Pro: Everything You Need To Know About Apple's New Power Laptop 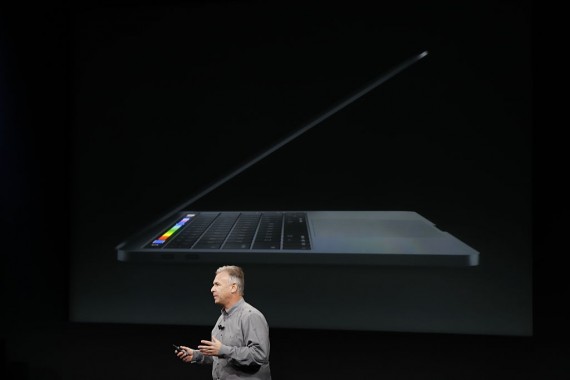 Fans have been anticipating for the release of the New MacBook Pro. We discuss the much-anticipated specs of Apple’s most powerful laptop. (Photo : Photo by Stephen Lam/Getty Images)

Ever since the release of the 12-inch MacBook and the recent update to MacOS Sierra, Apple fans have been eagerly anticipating for a new MacBook Pro. Apple CEO Tim Cook just announced and unveiled the specs of the new MacBook Pro.

The new Macbook Pro will come with its latest operating system, MacOS Sierra. Fully integrating the universal clipboard with all your Apple devices such as the iPhone and the iPad. This allows you to copy text from your device and have the ability to paste it using your other device. This feature has been expected, so we look more into detail on the other new features that the MacBook Pro 2016 has to offer.

There will be three variants in the new Macbook Pro, a 15-inch and two 13-inch variants. All will have a force touch track pad that is double the size of the previous version. USB-C ports, which is also expected since it was already included on the 2015 12-inch Macbook. Up to 10 hours of battery life. And it will come in only two colors, silver and space grey, no rose gold for the Macbook Pro.

Apple also listened to its fans as they include the highly anticipated Touch Bar. The Touch Bar is a mini retina display that replaces the row of function keys at the top of the keyboard. It is a small multitouch screen, yes, finally, a touch screen on a Mac, that uses gestures and taps to perform a vast variety of tasks. The mini touch screen can support up to ten fingers at once.

The event showed off the Touch Bars ability to be tuned or customized based on the task at hand. It currently uses Apple's own software but showed that it may have functionality with programs like Adobe Photoshop and DJ Pro in the new future.

For added security, the new Macbook Pro will also have Touch ID feature, same as the one that can be found in iPhone 6 and above models and certain models of iPad. It can be found and is integrated with the power button. The TouchID is also going to be compatible with Apple pay for authentication.

In case you are wondering why there are two 13-inch models, the first 13-inch model is going to be the new version of the MacBook Air. This version will not be having the Touch Bar or Touch ID Feature. It has a retina display and is lighter and significantly smaller than the other two models.

The 13-inch Macbook Pro with a thickness of only 14.9 mm is going to be 13 percent thinner than the Air, which is 18mm. The 15-inch version is only going to be four pounds and only three pounds for the smaller 13-inch Pro.

The 15-inch version is going to have a 67 percent brighter retina display and 67 percent higher contrast and a color gamut that is 25 percent brighter than the previous ones. This feature will be great especially for photo editors, videographers and other types of visual artist.

Inside, the Pros are still powered by Intel i5 or i7 processors with a new thermal cooling to lessen overheating. The new processors will also be quieter than the previous versions.

Instead of the Magsafe, the new Pros will now be charged using the Thunderbolt ports, a total of 4 ports can be found on the MacBook Pro. By using an adapter, the ports can be used as a USB, DisplayPort, HDMI or a VGA. The headphone jacks are still on the new models.

For over a year, Apple fans have been anticipating for the release of the new iPad Mini. Will the new Mini be on steroids and will it finally belong to Apple's Pro lineup?