Are Robots Going To Take Our Jobs? 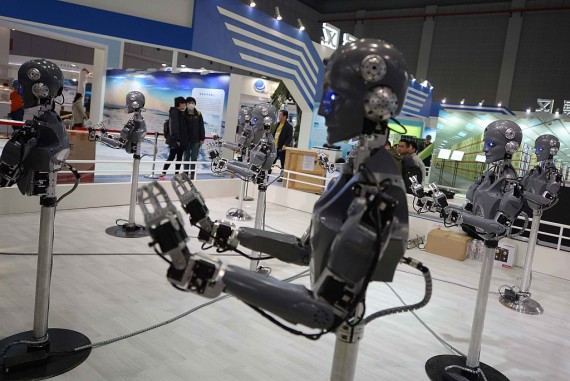 According to forecasts, robots are predicted to soon take over most of our jobs. (Photo : Photo by VCG/VCG via Getty Images)

In a world where the technology is fast changing, our jobs are not secure anymore. The fast paced advances in the robotics industry are threatening our employment security.

Robots Will Take Our Jobs

Survey studies have shown that the vast majority of respondents anticipate that artificial intelligence and robotics will permeate wide segments of daily life in the near future. This can have huge implications for a wide range of industries such as transport and logistics, health care, home maintenance and customer service. But, while the experts are largely consistent in their forecast for the development and evolution of technology itself, they are deeply divided on how advances in robotics and AI will impact the employment picture in the near future.

Robots and intelligent machines seem likely to become the workforce of the future. People will have less work to do as more and more jobs are replaced by technology. The iconic Silicon Valley futurist who is the founder and CEO of SpaceX, Testla and SolarCity, Elon Musk, believes that people will ultimately become sustained by payments from the government while their jobs are performs by robots.

According to Musk, is a pretty good chance that the government will have to introduce a universal basic income or a similar measure that will sustain people's living expenses as the unemployment due to technological advances will become rampant. There will be no other options.

According to Wired, President Obama addressed the idea of a universal basic income in an interview this summer with Joi Ito, the Director of MIT's Media Lab and Scott Dadich, editor in chief of Wired. The debate whether a universal income is the right model is expected to continue over the next 10 years. It remains to be seen whether this idea is going to be accepted by a broad base of people.

While technology is rapidly changing the global workforce, the society is slowly getting accustomed with the idea of a basic human income. But, according to Musk, people will not get bored, since the leisure time will increase and they will have time to do more interesting things.

A universal basic income for all and a long horizon of leisure time may sound good. However, for some, it can also be intimidating. Having a job is grounding for many. A career can be something that gives purpose to life. Many Americans would probably prefer to continue doing some kind of work, even when a universal basic income scheme will be implemented.

The Internet of Things will lead to the elimination of low-skill jobs and their replacement with high-skill jobs.

Tech and legal experts have met to discuss about artificial intelligence at an event sponsored by the White House.