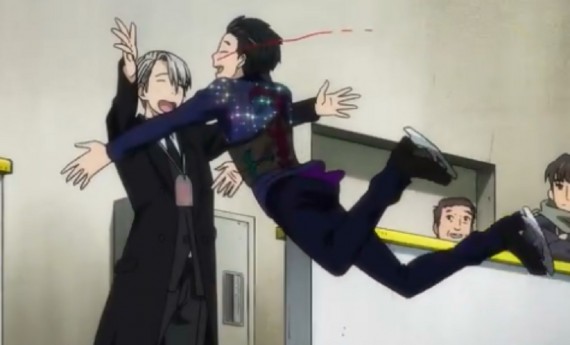 Yuri Katsuki is going to compete against a familiar face in China in "Yuri!!! On Ice" episode 6. Despite not landing all his jumps perfectly, Yuri is in the Kyushu championships and announced he is going to compete in the Grand Prix using the theme "love." One of his first competitors in the China preliminaries is his friend, Phichit Chulanont who is now coached by Yuri's former coach, Celestino.

Yuri had an intense competition with Japanese skaters much younger than him in "Yuri!!! On Ice" episode 5, titled "Face Beet-Red!! It's the First Competition! The Chugoku, Shikoku, and Kyushu Championship." With his terrible luck in lottery, Yuri drew the position he hates the most, he is going to perform his short program "Eros" first! Seeing the young skater who beat him in the nationals after, Kenjiro Minami, Yuri is tensed and can't focus on his performance during the warm-up. His coach Viktor gave him a hug to ease him and he did quite well with a score beating his personal best. However, Viktor noticed that he was focusing too much on his jumps and urged him to focus on the artistic expression of the free program over technical mastery.

However, Yuri has another idea! He disobeyed Victor and changed the jump elements in his jumps. We got to hear the whole "Yuri On Ice" track that Yuri's friend composed for him for the first time. Yuri made some mistakes that even made him bump his head in the ice rink and got a nosebleed. Yet, his uncertain jumping actually contributed in expressing his program which is themed on his career so far -- which is full of failures by the way -- and he won with the highest scores!

Kenjiro Minami, who actually idolizes Yuri (he even got his sign), challenged him to compete in the Grand Prix someday and not quit figure skating until then. Yuri made an announcement that his theme for the Grand Prix will be "love." He described it as a non-romantic form of love for his family, friends and his coach, Viktor (but how you interpret that so-called "love," depends on you). He also said Viktor is the first person he wants to hold onto. "I don't really have a name for that emotion but I have decided to call it love," he added. He made it sound like a confession, seriously.

The next event would be in China. It would be a hard fight not just because one of his competitors will be his friend, Phichit Chulanont of Thailand but also because of his former coach, Celestino Cialdini. The 45-year-old Italian-American coach was Yuri's coach when he was training at Detroit Skating Club. Yuri ended his contract with him after his terrible performance at the previous Grand Prix and Yuri went to Thailand.

We have seen Yuri in the previous episodes conversing with Phichit and they're very friendly so there's no problem there. However, Celestino might be harboring some ill will against him. Although they seem to be still talking to each other (Yuri calls Celestino for advice sometimes), but it will surely not fit with him that Yuri is doing good with Viktor while he failed to motivate him before. That will make him look like a bad coach. Also, Phichit seems to have shown a good improvement since Yuri last saw him and Celestino is sure Phichit will win.

Meanwhile, it seems like a date in China for Viktor and Yuri. Viktor is already deciding what to eat in China and that closeness while they are watching a video with fellow contestants looks really intimate.

Fans will see the demi-humans live in "Ajin: Demi-Human" live-action movie next year. What's more? Takeru Sato is cast for lead role. Kei will be portrayed as a medical intern to fit Sato's real age.

'Imitation' Review: Why You Should Definitely Read This K-pop Idol Themed Webtoon

Did you like "Dream High," "You're Beautiful" and other dramas that featured K-pop idols? Then, this webtoon is right for you. Read the review below on why you should read "Imitation."

'Yuri!!! On Ice:' Why You Should Watch This Anime Series Despite Its Yaoi Tendencies

Not a Yaoi fan? Good storyline, cute characters, added with figure skating stunts might push you not to resist and love "Yuri!!! on Ice."