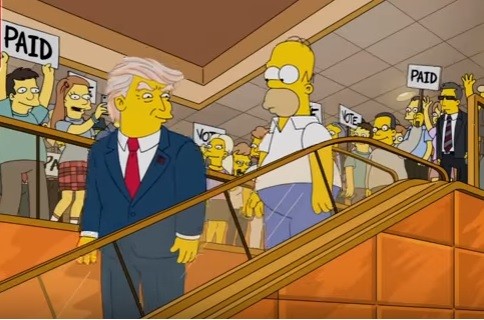 The Simpsons again predicted the future and its damn accurate. (Photo : Zulo12Tv / YouTube)

The longest episodic TV series in history is not only great at making people laugh but bizarrely accurate in predicting our future. It might sound crazy but they've already done it a lot of times.

The Simpsons who just renewed their season made the headlines once again not because they are topping the ratings like they always do but because of them predicting the future. A lot of times, especially Homer Simpson, tends to make a bold prediction about something and after a few years it turns to reality. We can name almost 50 things that he and the show predicted but we are going to stick with the most recent and famous ones.

1.Donald Trump Elected As The President Of United States.

You may call this as coincidence but as I've mentioned on top, the guys from Simpsons has already done it a lot of times. They predicted that Donald Trump will win 16 years ago in their episode "Bart To the Future" and "Trumptastic Voyage". Matt Groening, said: 'Trump was of course the most absurd placeholder joke name that we could think of at the time, and that's still true. It's beyond satire.'

The episode was aired last 2008 when Homer Simpson was trying to vote for Barack Obama but it keeps going to John McCain. The tree house of horror XXIX showed Homer's struggle in forcing the machine to log his vote properly. During that election year, a lot of voters reported that their votes were changed and the machine were programmed to count the vote for McCain instead of Obama.

The segment started where Lisa and his soon-to-be husband was trying to contact their friends regarding their impending wedding. Lisa's boyfriend then used a "smartwatch" where he was able to talk on his wrist watch. Some of the critics actually laughed at the idea before but who is laughing right now?

Smartwatch was not the only device that the Simpsons was able to predict. During those fruitful years in the 90's they were able to predict at least 20 devices that we are using right now. Eat up Martha, it is where the bullies of The Simpsons tried to talk to a touchscreen phone but it failed miserably. One Apple engineer acknowledged that project "Siri" was part of The Simpsons idea.

One episode that I will never ever forget. It was so perfect to a point that it's almost bizarre. The story revolved around kids from Springfield who were trying their very best to farm. The episode title is "Bart Carny", where it shows that the kids are connected to a machine and start farming. It is a simulator that the kids Springfield enjoyed but was totally destroyed. The concept was acknowledged by the creators of Farmville.

We don't know how the guys from the Simpsons is doing it but every time they release a certain prediction, nine out of ten,are at most pretty accurate. Hopefully, they will be able to predict as well if they are going to stay for a lifetime.

‘The Simpsons’ Gives Fans Their Own Version Of 'Making A Murderer', Including Itchy And Scratchy

Fun Facts About The Episodic Series The Simpsons

'The Simpsons' Writer Mike Reiss Reveals Japanese Audience Not Much Of A Fan; Show Not Entirely Political

"The Simpsons" not getting much love from Japanese audience unlike the rest of the world. Mike Reiss, show writer and producer feels strong affinity for political satire now more than ever.

Since the release of Nintendo Switch is coming near, the games that will be compatible might have been revealed by a cartoon series.